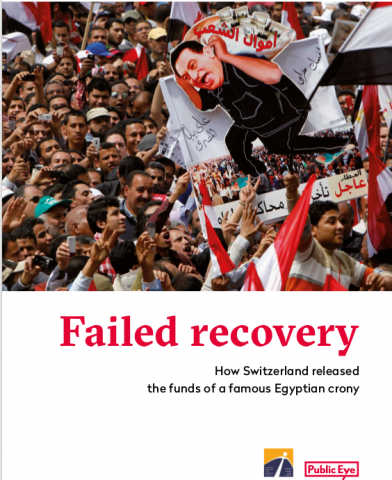 How Switzerland released the funds of a famous Egyptian crony

Following the Arab Spring, the Swiss Authorities blocked 700 million Swiss francs held by Mubarak’s clan. Despite the opening of criminal investigations in Switzerland and Egypt, it appears that the confiscation of this money is increasingly unlikely. One quarter of the money frozen on Swiss bank accounts was already released in December 2016. Last August, the Federal Prosecutor discontinued the cooperation with Egypt – explaining that it had led to no result.

In a report partly based on unpublished court documents, Public Eye sets out, together with its Egyptian partner organization EIPR, the story of the Mubarak money in Switzerland. This report reveals information that has not been published before. Specifically, this new information relates to Hussein Salem, one of Mubarak’s best known cronies and the major beneficiary of funds released in December 2016. The report looks at how his Swiss (shell) companies were used to syphon off Egyptian public money and at the lack of sanctions on Swiss financial intermediaries – mainly banks – involved in those deals so far.

Over a period of thirty years, the former Egyptian president and his entourage embezzled enormous sums of cash through a comprehensive system of corruption. On the 11th February 2011, the day of Hosni Mubarak’s downfall, the Swiss government blocked not only his Swiss accounts but those of his entourage too. Shortly thereafter, the Federal Prosecutor opened investigations into the clan. In order to take permanent hold over the money, the authorities relied on international legal assistance in criminal matters, generating over 70 requests for legal assistance between Swiss and Egyptian prosecutors between 2011 and 2016.

Nevertheless, the illegal origins of the money could not be proven, and because the Egyptian justice system was unable to prove it, the funds could not be confiscated. In Hussein Salem’s case, the Egyptian authorities decided for an out of court settlement, essentially granting amnesty to Salem and his entourage. This led in December 2016 to the release of 180 million Swiss francs that had been frozen since 2011. In August 2017, the Federal Prosecutor quietly closed the remaining open but fruitless requests for legal assistance. It is to be feared that the remaining dubiously-originating funds will soon be released back to those previously associated with the Mubarak regime, despite the great hope that the Egyptian people held in the return of this money.

Since the Arab Spring, asset recovery processes have occupied a growing space on the international agenda. High profile summits discuss the best ways to seize and return assets from kleptocratic regimes. But when it comes to putting words into reality, the results are disappointing. According to 2011 World Bank figures, some USD 5 billion have been returned since the end of the 1990s – almost half of it by Switzerland. But this represents a very small part of the USD 20 to USD 40 billion worth of estimated illicit money flowing out of countries each year, linked to bribery, misappropriation of funds, and other corrupt practices. There are many reasons to explain this poor result. But analysis of the barriers asset recovery cases meet based on concrete cases is scarce. This report provides a case study that should help to fill that gap, to understand better the challenges of asset recovery and to learn the lessons. In particular, it shows the inadequacy of the Swiss law for dealing with money from PEPs, failing to enable assets of dubious origin to be seized when international legal assistance breaks down.