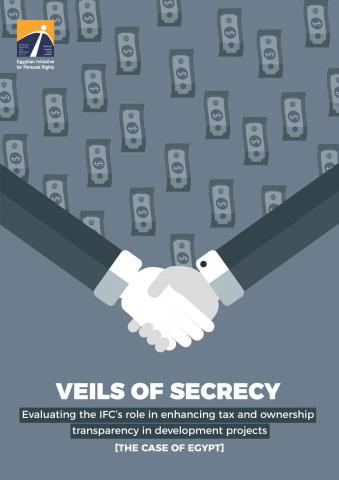 Veils of secrecy: evaluating the IFC's role in enhancing tax and ownership transparency in development projects

The International Finance Corporation (IFC), a member of the World Bank Group, is the largest development institution in the world that focuses exclusively on private-sector operations in developing countries. The IFC finances its operations through issuing bonds in international capital markets. IFC prides itself on its consistent AAA rating from the credit-rating agencies Standard and Poor’s and Moody’s, which gives it privileged access to capital markets that might not be available to its clients. Despite being a development agency, the IFC’s reliance on capital markets means it has the same profit incentive as any private sector operation, with the potential for tension arising between its developmental and profit-making goals.1

The IFC has been operating in Egypt since 1995 and has worked with dozens of different companies across different sectors, mainly through lending or holding equity in the investee company, as well as by providing technical support. We have found through our research that the IFC invests in operations that are deeply involved with some of the most secretive offshore jurisdictions in the world, where information about the real owners of these companies is in many cases obscured. The use of such secrecy jurisdictions normally goes hand in hand with aggressive tax-planning schemes used to circumvent the law (without necessarily breaking it) to significantly reduce corporate tax bills and conceal the identity of the owners of the enterprise.

The issue of tax avoidance has attracted a great deal of attention especially after the economic meltdown of 2007–2008, which prompted many governments around the world to implement austerity programs. The austerity programs in many cases have deepened economic stagnation, setting a vicious circle in motion that the world seems still to be struggling to break. This made the immense amounts of wealth hidden in offshore secrecy jurisdictions a crucial issue—not to mention the immense amount of taxes lost due to such practices and its impact on developmental and economic rights.

We expect and would hope that development organizations such as the IFC, the arm of the World Bank lending to the private sector, would be more sensitive to issues of corporate transparency and tax efficiency—or lack thereof—due to their negative developmental impact. The IFC developed its own transparency policies in 2012 and 2014. The first is the Access to Information Policy, hereafter referred to as “the IFC disclosure policy,”3 and the second is the Use of Offshore Financial Centers in World Bank Group Private Sector Operations, hereafter referred to as “the IFC offshore policy.”4 Yet, disappointingly, these improvements did not consistently improve corporate malpractice. As will be discussed in detail throughout the report, we have identified and detected many cases of aggressive tax avoidance by IFC investee companies during all time periods and across various sectors using a wide variety of techniques.

In an interview with Walid Labadi, the IFC country manager in Egypt, EIPR asked if the policy had improved transparency standards in relation to tax havens and if it had influenced the selection of companies to finance through loans and/or equities. “Most of what the IFC does is that we invest in a particular project company and we monitor very closely how they use and distribute their money, so we already had in place a lot of restrictions on what those companies could do,” said the IFC Egypt chief.

“The policy was successful in terms of encouraging countries and companies to move forward in transparency and there has been a big impact in terms of forcing and compelling offshore tax-haven jurisdictions to improve their transparency,” he continued.

However, Labadi does not think it dramatically changed the way IFC does business since, he said, development finance institutions (DFIs) like the IFC were already consistent with this approach all over the world. Labadi also said that no proposals have ever been rejected by the IFC in Egypt due to debtor-related offshore activity.

Given the veils of secrecy that characterize issues of tax avoidance and evasion, our research will inevitably have many gaps. We discuss this in more detail in the methodology section (Annex 1). However, these shortcomings are not the result of negligence or laziness at part of the researchers, but rather the unavailability of key information and data needed to form as close a picture to reality as possible.

Urgent action is necessary, and institutions like the IFC and the World Bank Group have considerable leverage and are well-positioned to tackle the issue of tax transparency in the private sector. We explain in detail the shortcomings of our findings, but if anything, our findings and estimates are understated. Aware of methodological challenges, our research team, whenever faced with a choice, always opted for the more conservative estimate or evaluation to avoid the typical accusations of exaggeration.