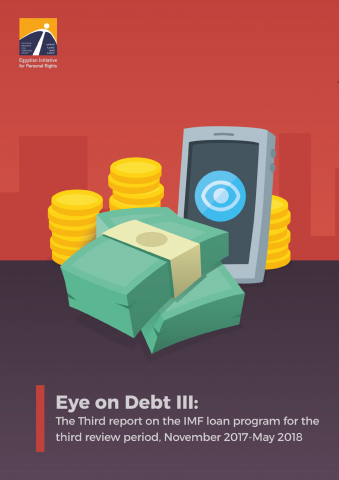 Third report in the series “Eye on Debt.”

This is the third report in the series “Eye on Debt.” It assesses the measures specified by the Inter- national Monetary Fund during the third review covering the period from November 2017 to May 2018. The report also tracks the steps taken by the government during this period and assesses what they have achieved.

“On June 29, 2018, the Executive Board of the International Monetary Fund (IMF) completed the third review of Egypt’s economic reform program supported by an arrangement under the Extended Fund Facility (EFF). The completion of the review allows the authorities to draw the equivalent of SDR 1,432.76 million (about US$ 2.02 billion), bringing total purchases to SDR 5,731.05 million (about US$ 8.06 billion).”1

Eye on Debt III evaluates the economic and social impact of these measures, based primarily on economic literature and previous international experiences, in the absence of official data.

In the period reviewed by the report, the IMF program imposed 14 measures on the Egyptian gov- ernment, including two measures with a positive socio-economic impact and eight measures with a negative impact on citizens and economic development more broadly.

Examples of the latter include continuing with the implementation of a contractionary monetary policy and cutting budget deficit through inequitable adjustment for fiscal policy. The government implemented only four out of the 14 measures, all of which have a negative socio-economic impact.

The IMF also overlooked three measures pertaining to transparency of information and data that were mandated for in the original agreement and which the government did not implement in any of the reviews. These are the regular publishing of the monetary policy report, the financial stability report and medium-term fiscal strategy paper. The IMF report of the third review report did not mention that the government has not implemented these measures.

In addition to this analysis, much economic data covering the first fiscal year 2017/2018 of the imple- mentation of the IMF program has became available, and so Eye on Debt III discusses selected topics in more detail and focus.

These are the economic risks of the program and economic growth that was achieved; the extent to which this growth is equitable and sustainable; and the contradic- tions between the monetary policy and fiscal policy laid out by the IMF.

The report assesses the economic and social impact of the economic adjustment program, agreed upon by the Egyptian government and the International Monetary Fund as a condition for Egypt’s receipt of $12-billion loan under the Extended Fund Facility, to be disbursed in six tranches. Egypt receives each tranche after a team of IMF experts confirm that Egyptian government has complied with the agreed upon measures within the specified timeframe.

This independent review also seeks to track which measures demanded by the IMF have been implemented by the government and which have not.