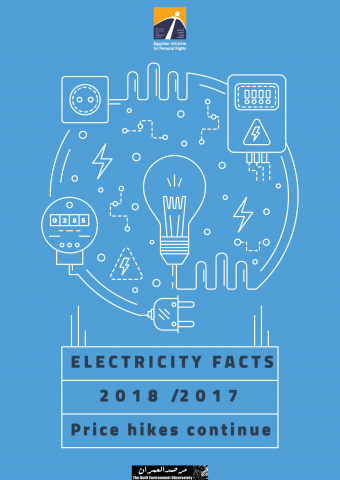 The Egyptian government has pushed ahead with increases to the price of electricity for all consumption brackets for the sixth year in a row, without taking into consideration the effect that record inflation rates have had on living costs, particularly for low-income households, during the past year.

This report examines the effects that these increases have had on low- and middle-income households, questioning the justifications given for these price hikes, and concluding with a number of recommendations which would limit the burden on these households, introduce transparency and restructure financial management within the electricity sector.

The income groups referred to in this report are based on data from the Central Agency for Public Mobilization and Statistics (CAPMAS) on monthly electricity consumption by income quintile (Appendix 2).

Major increases on all consumption brackets and the majority of items

After electricity bills increased by an average of 33% last year (2016/2017), the minister of electricity issued decree 312/2017, which pushed bills up by an average of 27% for the current fiscal year, 2017/2018 (Figure 1). Increases ranged from 15.4% for the first consumption bracket to 43.3% for the seventh, a slight improvement on the previous year, which saw the greater proportion of increases affecting the lowest consumption brackets. The third and fourth brackets, however — corresponding to the extremely-poor and middle-income households — saw major increases, at 22.4% and 27.9% respectively. 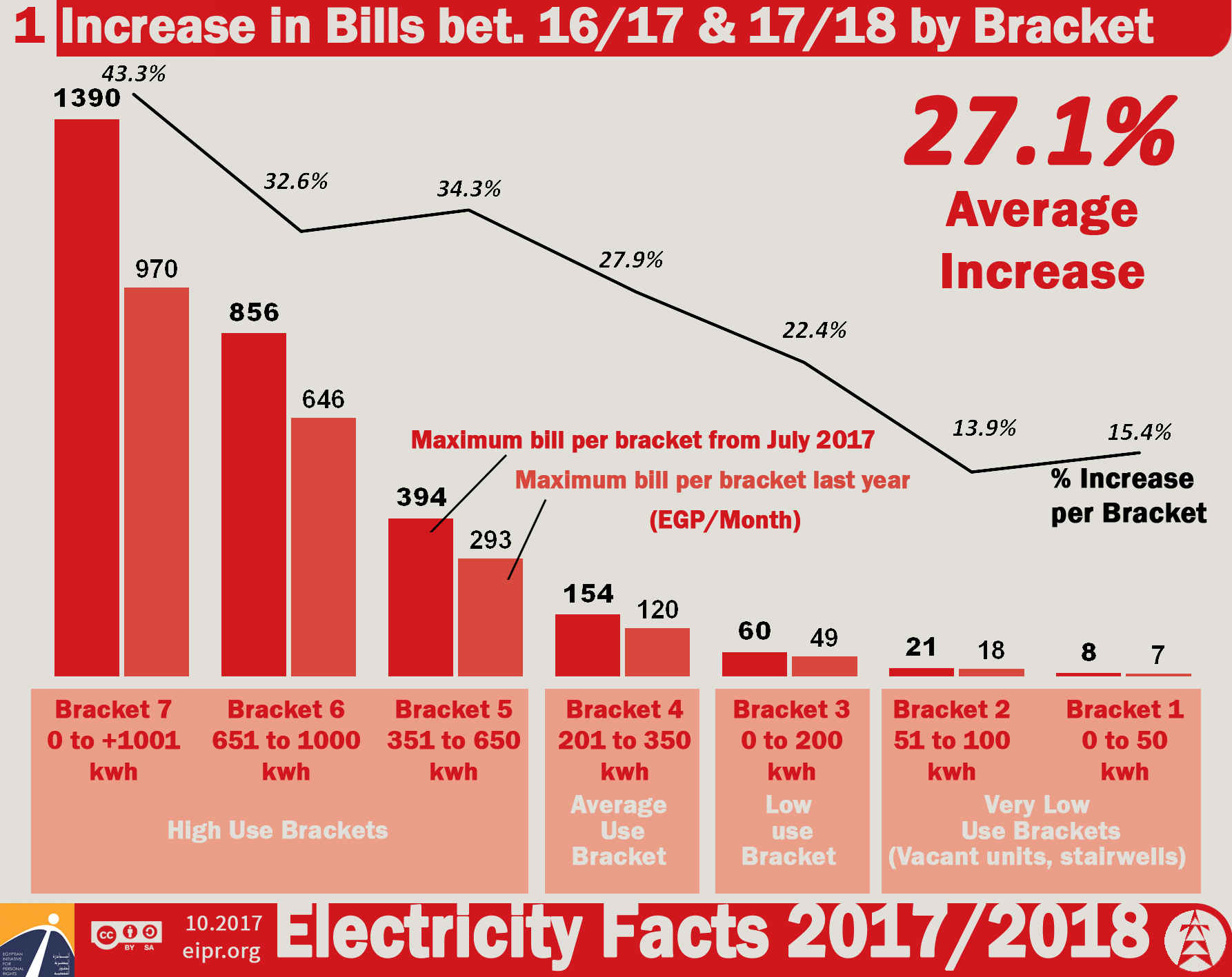 The increase affected two items used to calculate electricity bills: the “electricity consumption tariff” and the “service fee,” an item introduced in 2015. The tariff increased by an average of 28.7% on last year for all consumption brackets, ranging from 18.2% to 42.1% (Figure 2). It should also be noted that the tariff increased by 25.6% and 31% for the extremely-poor and middle-income households (the third and fourth consumption brackets respectively). 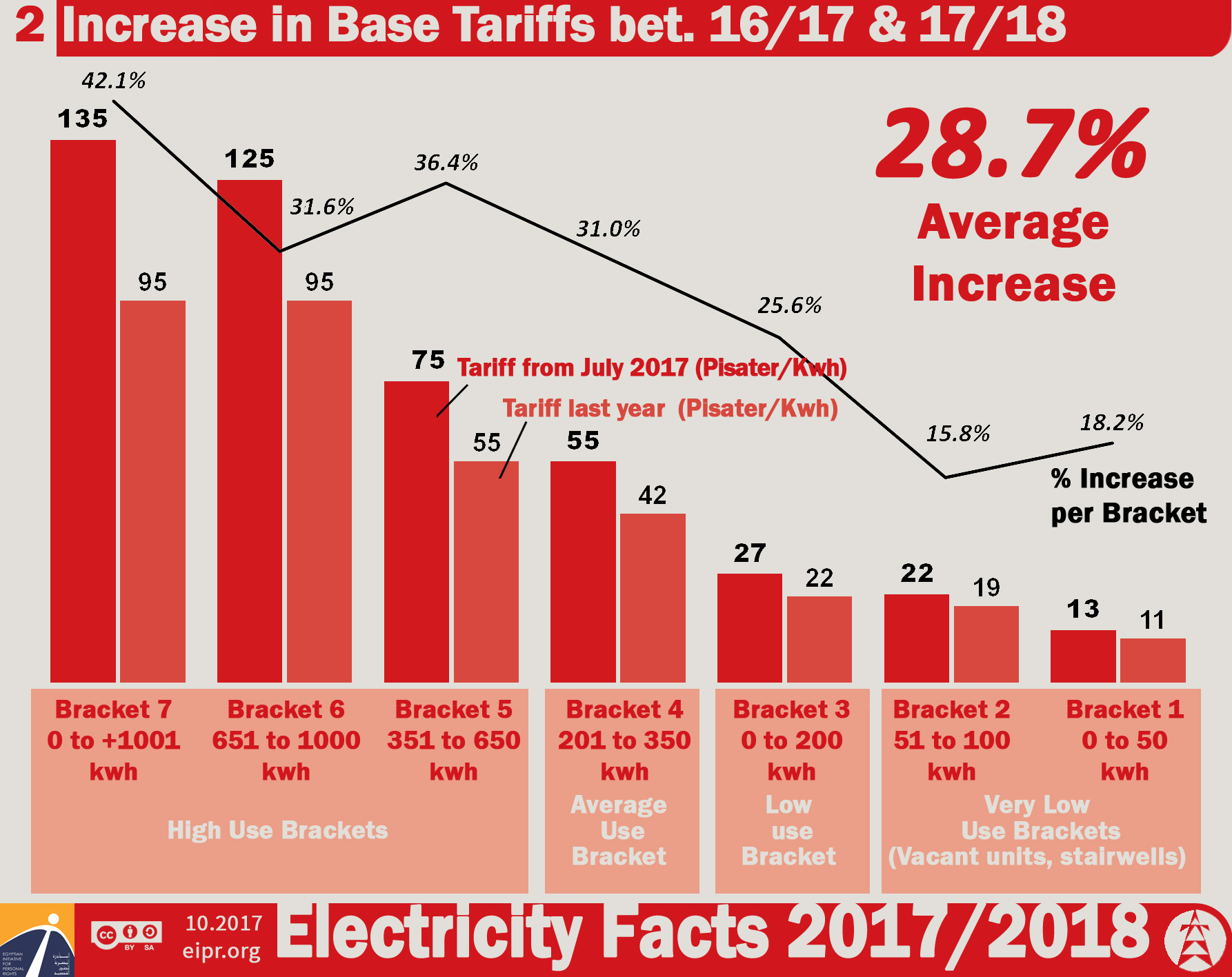 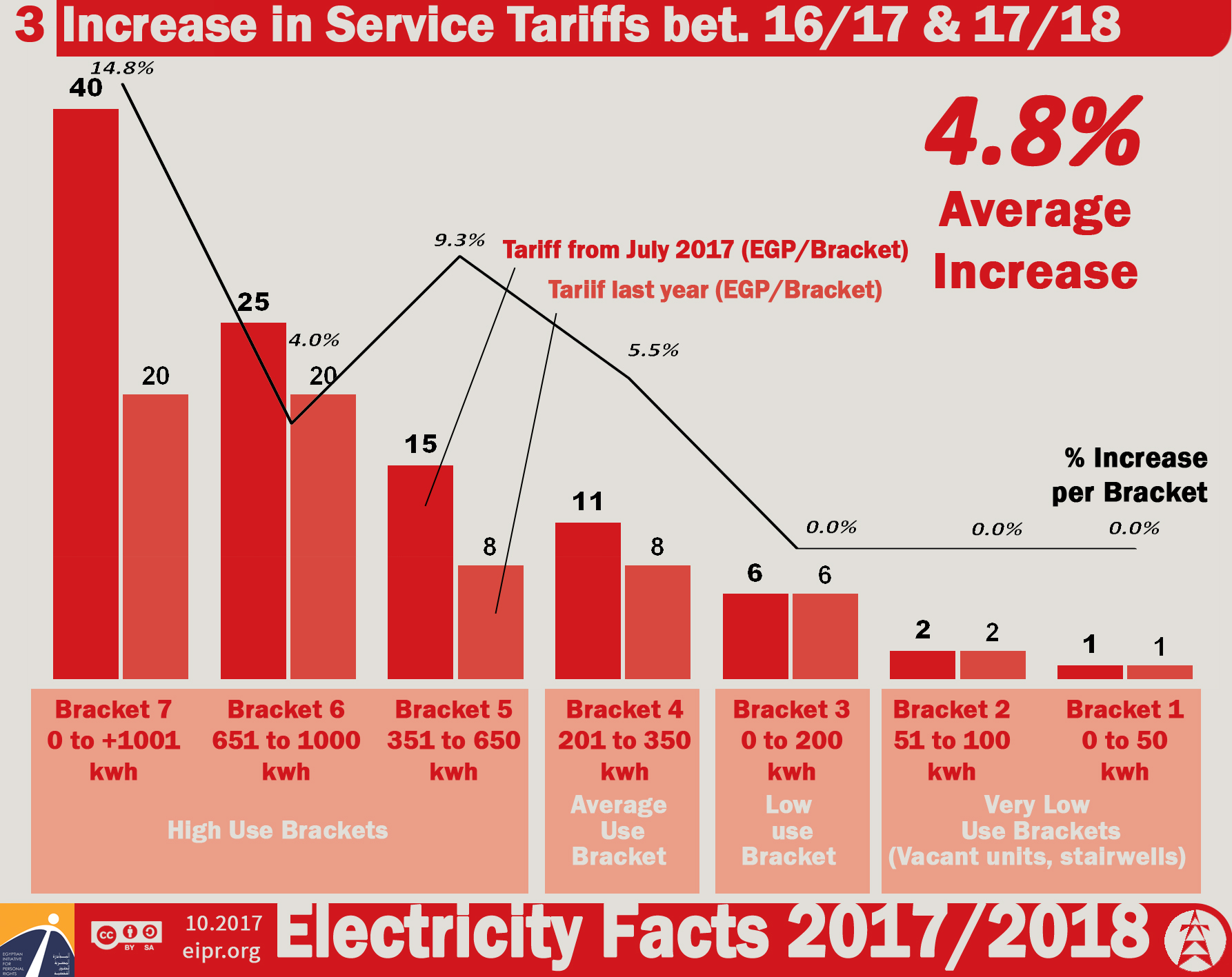 In contrast to statements made by Electricity Minister Mohamed Shaker claiming that increases for low-income households would be "negligible,"1 bills for the extremely-poor and middle-income households have increased by 22.1% and 25.2% respectively over the last year (Figures 4 and 5). This represents a cumulative increase of 218% and 271% for the two income groups since 2011. 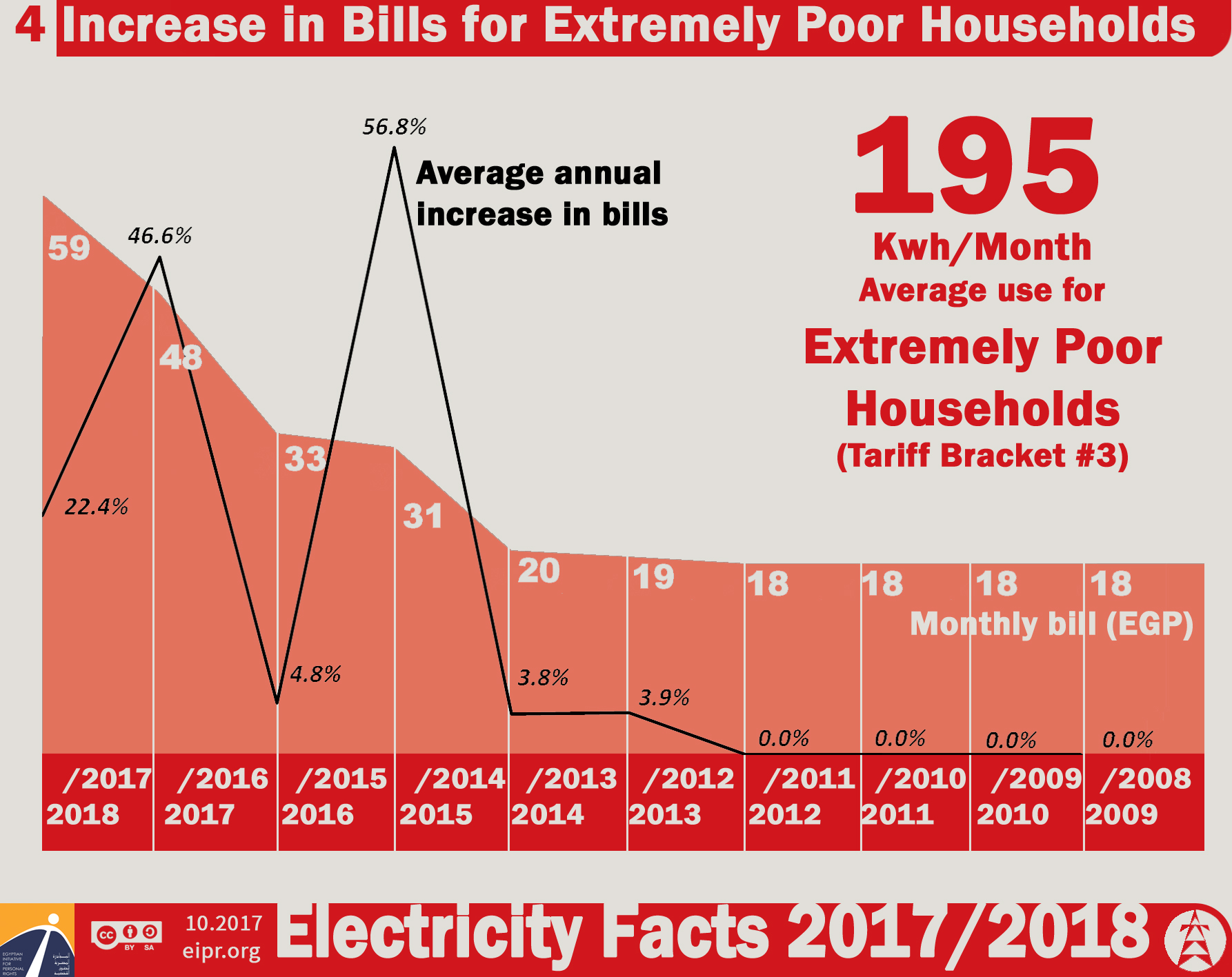 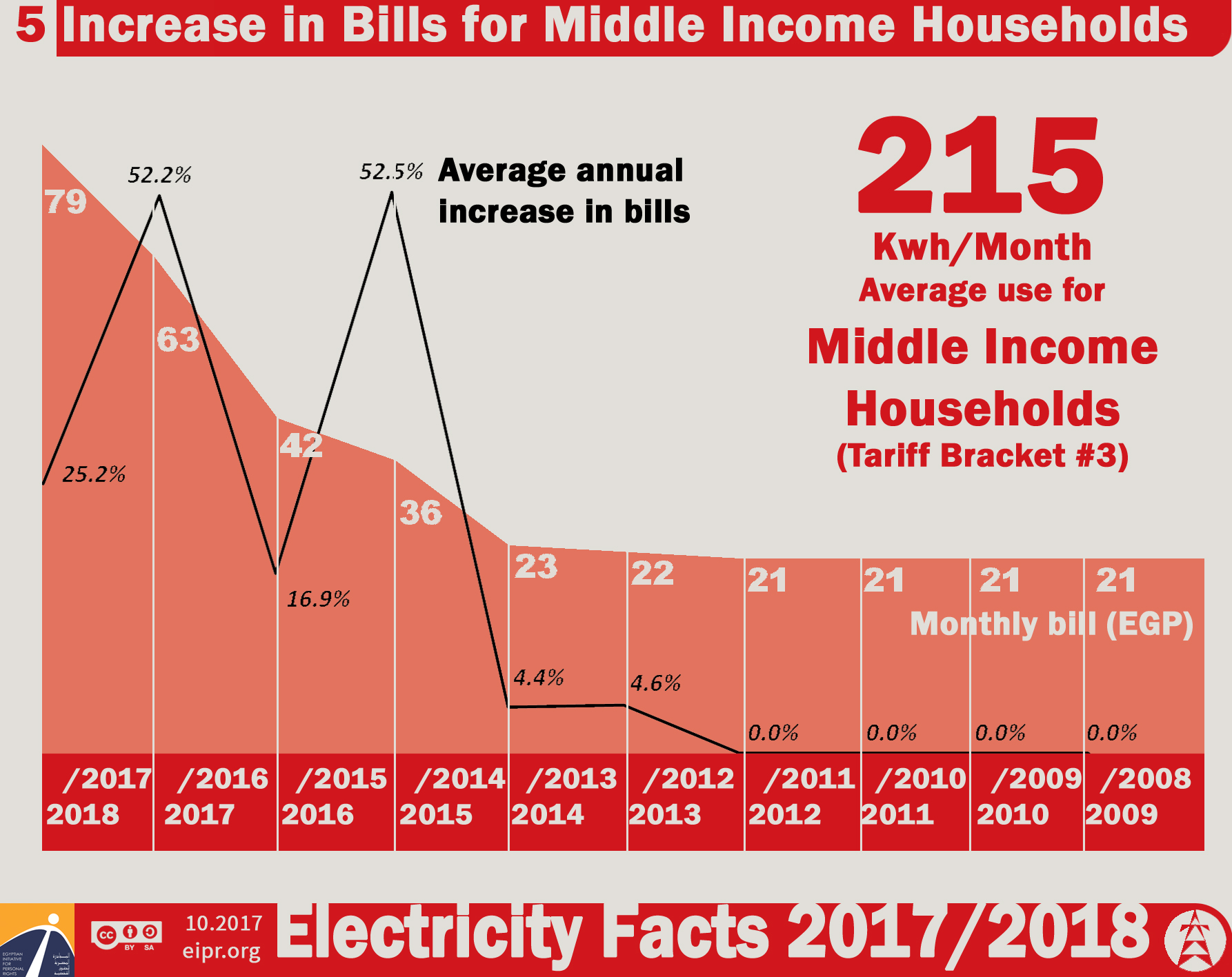 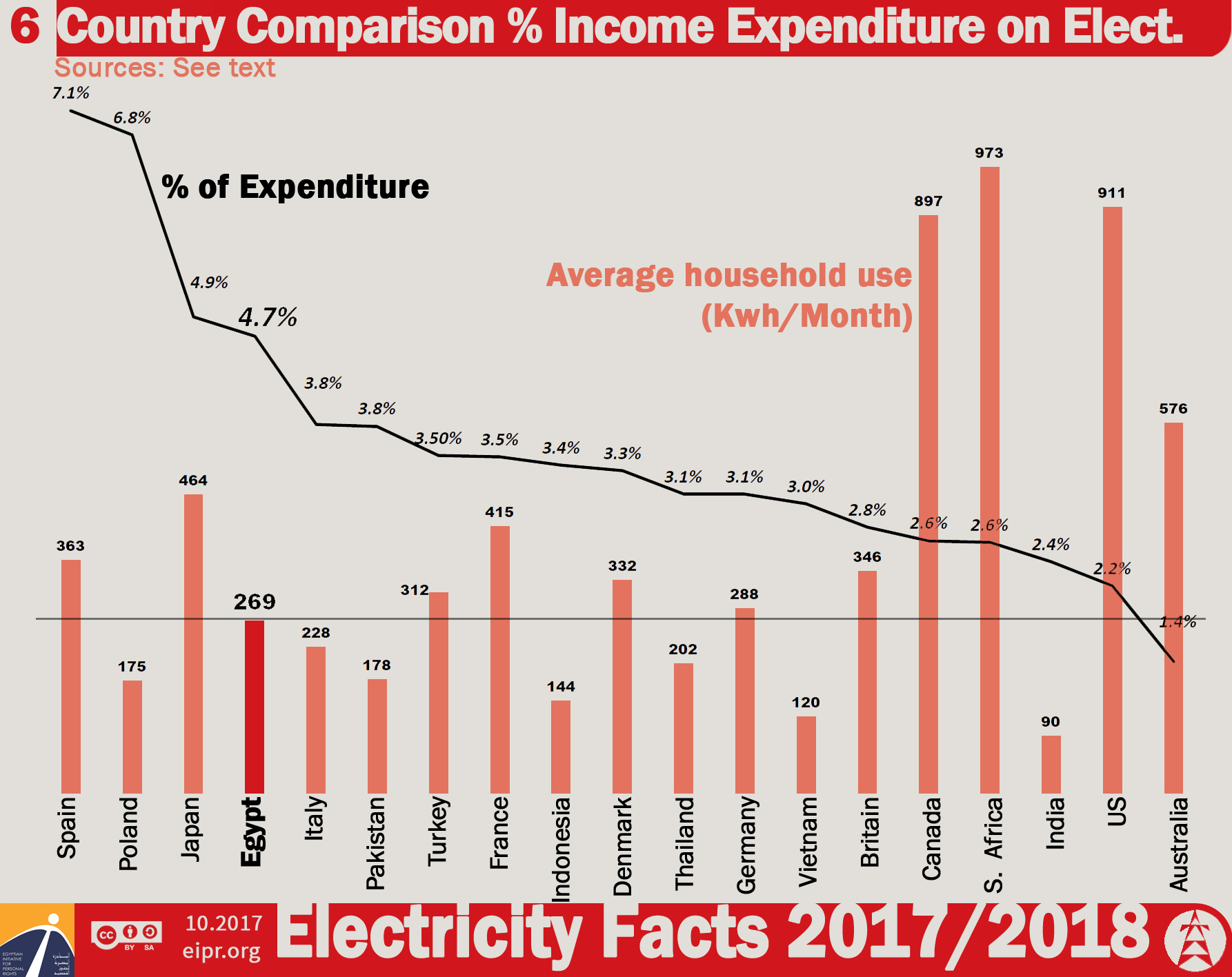 The government allocated LE48.6 billion to subsidize increases in the prices of fuel used to generate electricity for domestic purposes, distributed across the first six consumption brackets, but not the seventh. The subsidies increased gradually across the first four brackets, decreasing for the fifth and sixth brackets.1 However, calculating the actual subsidy received by each subscriber reveals that the higher the consumption bracket, the higher the subsidy, not the opposite — meaning that a consumer in the sixth bracket receives four times the subsidy received by a consumer in the third bracket, the extremely poor(Figure 7). 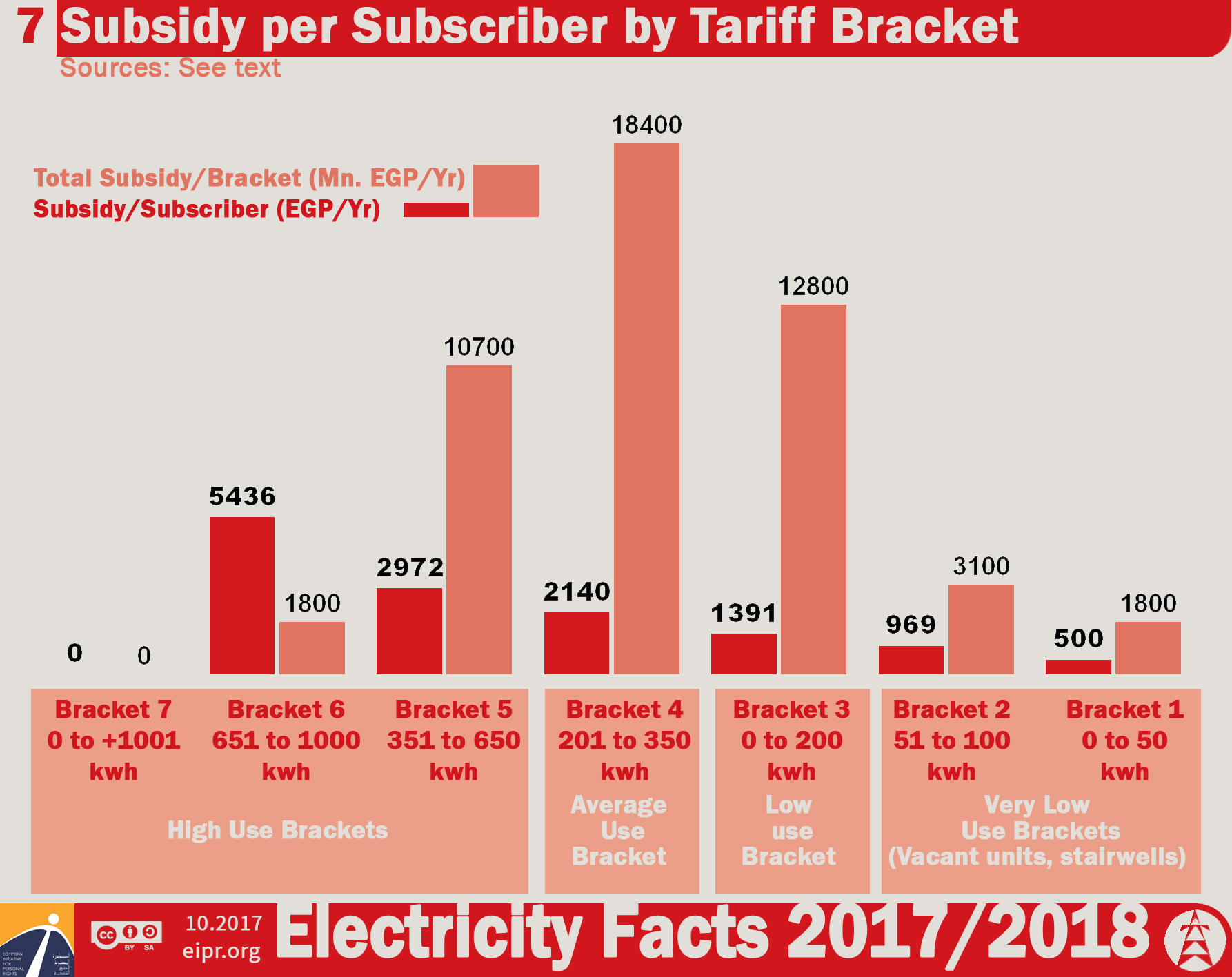 Consumption brackets are defined inconsistently, with the first bracket representing the first 50 kWh consumed per month (Figure 8), and the second representing consumption from 50-100 kWh (i.e. another 50 kWh increment). The third bracket, however, covers all consumption up to 200 kWh, thereby removing progressive charging, whilst the fourth bracket covers consumption of 150 kWh over the 200 kWh limit; this increment is doubled to 300 kWh for the fifth bracket, and increased to 350 kWh for the sixth bracket. The seventh bracket breaks with the principle of progressivity still further, with the 1000 kWh rate applied to the full amount consumed, and not only consumption over this limit. The distribution of consumption brackets can only be described as flawed, given that they neither reward lower consumption nor encourage electricity saving, except for at the highest bracket, and unfairly at that. 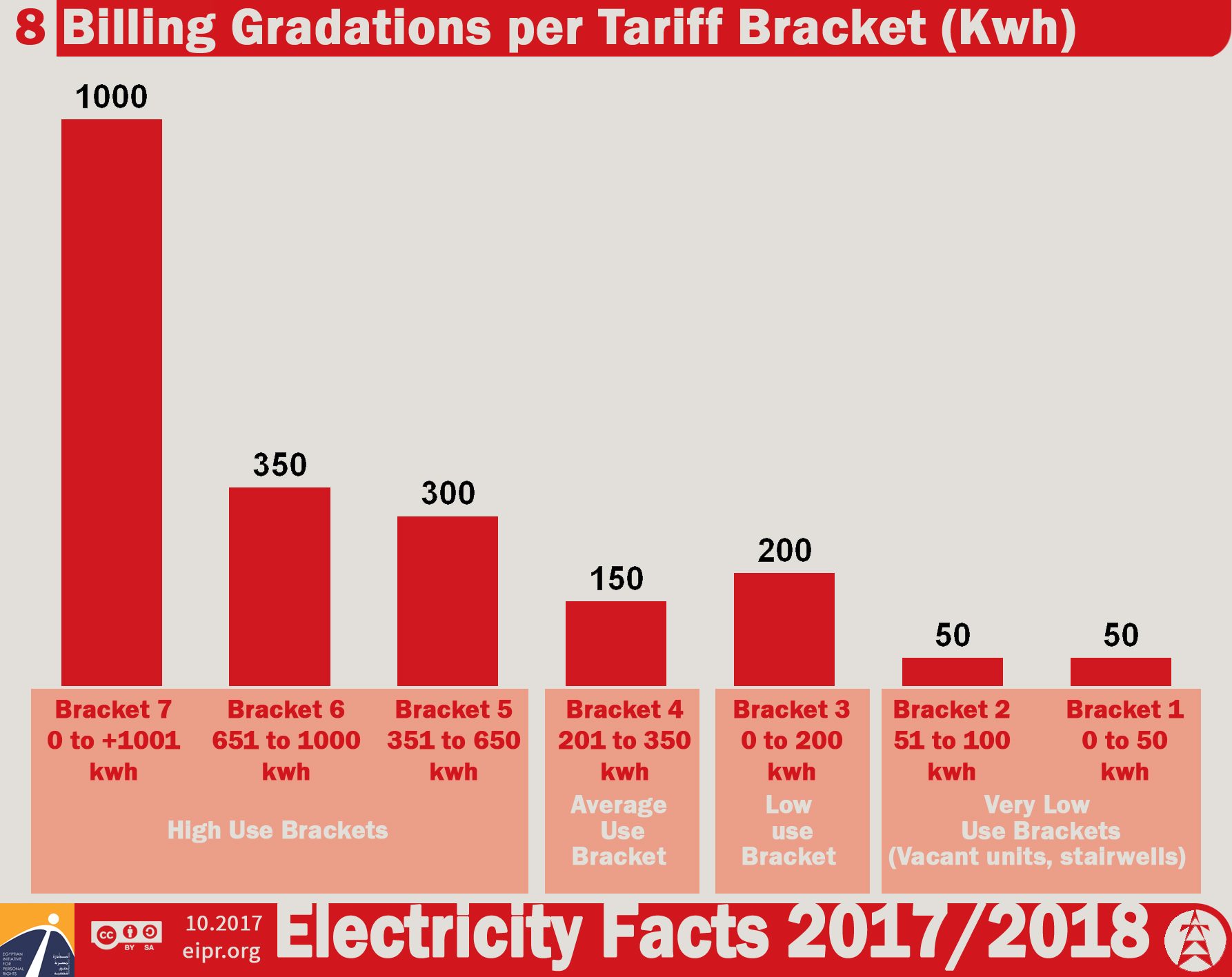 Billions of pounds accounted for by the government as “electricity subsidies” are actually used for subsidizing unjustified investments in the electricity sector rather than the costs of operating the electric utility Running costs only make up 17% of the total costs of the Egyptian Electricity Holding Company (EEHC), or less than a fifth of what subscribers pay in their monthly bill goes toward electricity services, with two-thirds of the bill going toward construction of new power plants and electricity grids, and the remaining fifth being used to service the company’s debts (Figure 9). 1

This has not been the case in the past, with operating costs accounting for 59% and 47% of total costs in the 2013/2014 and 2014/2015 fiscal years. The EEHC has forced subscribers to bear the burden of its inflated investment budget — which has increased approximately six fold between 2013/2014 and 2015/2016 — earmarked for building several large plants in order to increase the nominal generating capacity by 80% compared to 2013/2014 levels by the 2017/2018 fiscal year. The justification given was that this would improve the service and avoid having to resort to power cuts to reduce the load on the grid.

But electricity consumption in Egypt does not justify this increase in production. The peak load on the grid — the main indicator of the amount of electricity required for consumption — has experienced a 4% annual increase over the past seven years (Figure 10). The EEHC, on the other hand, increased the nominal capacity (the maximum rated electrical power output) by 12% annually over this period — three times the increase required for consumption. This increase went toward raising the operating reserve to 89%. The unreasonably high operating reserve is unjustified, as official figures show that the network can operate efficiently with a 14% operating reserve. Moreover, electricity generation shortages — which have resulted in frequent, widespread power cuts over the past few years — were not caused by a compromised generation capacity, but rather by inconsistent fuel availability and grid inefficiency, as the graph shows that the peak load in 2013/2014 decreased by 3.2% compared to the previous year, while the nominal capacity increased that same year by 3.9% compared to the previous year, with the operating reserve reaching approximately 23% (Figure 10). 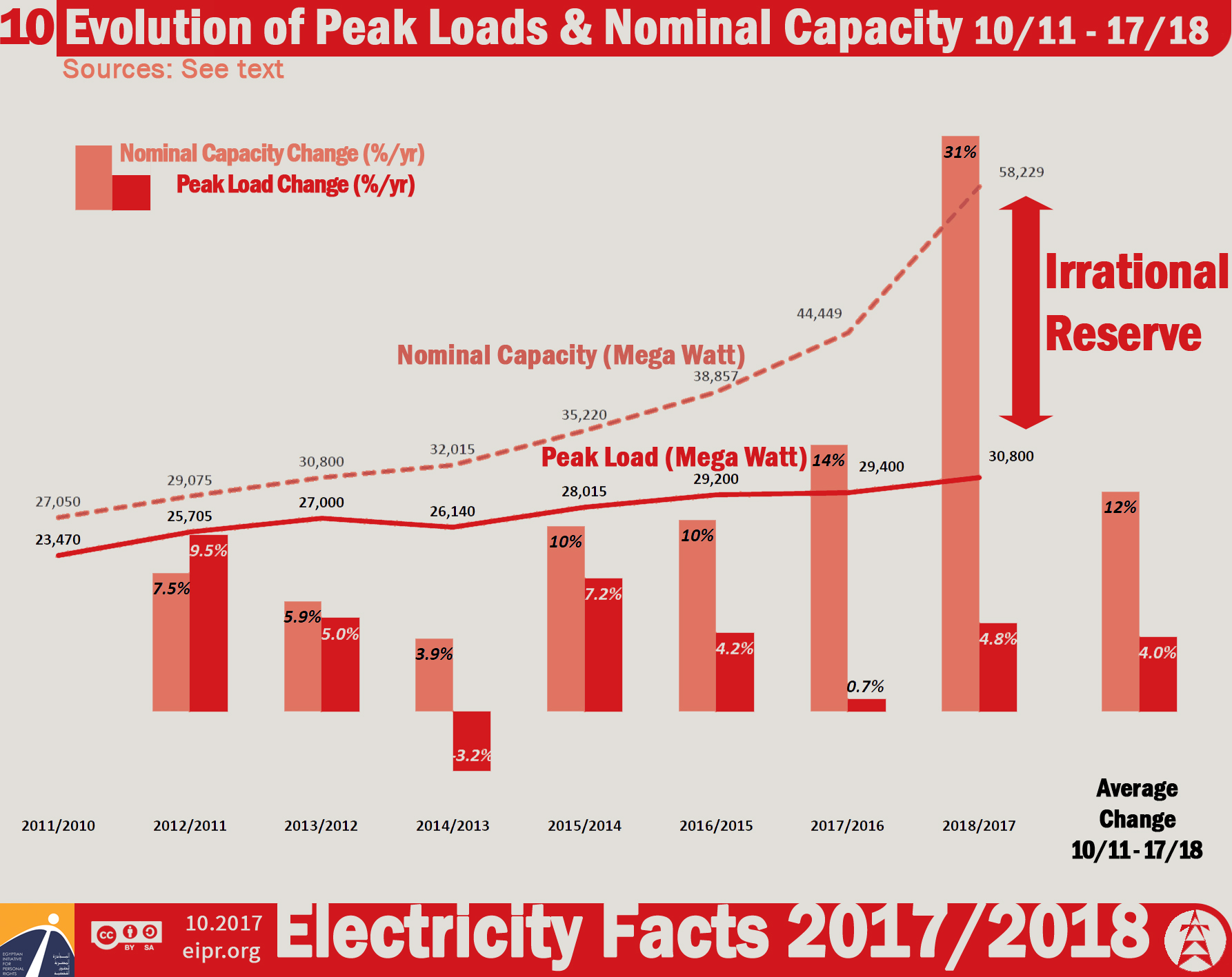 The EEHC does not provide an accurate or complete picture of its financial data to subscribers. The most important information in this regard is the cost of operating the electric utility, which subscribers pay as part of monthly electricity bills. According to the minister of electricity, generating costs have reached 95.3 piasters per kWh, whereby the mean sale rate is 50 piasters per kWh1 with a subsidy of up to 48%. These figures however, are highly implausible. Dividing the EEHC’s revenue by the amount of electricity sold shows that one kWh is sold at approximately LE1 on average2 — a higher price than the generating cost that the minister used. This revenue has also come despite huge arrears of unpaid electricity bills, especially by government agencies, which amount to LE25 billion.3

Delays in the timely release of the EEHC’s annual report means that the latest official data on the electricity sector is currently more than 16 months old.. CAPMAS, the government statistics office, is equally late in releasing its annual Electricity and Energy Report, which in turn is always on the previous year, in this case the 2015/2016 fiscal year.

The Egyptian Electric Utility and Consumer Protection Regulatory Agency (EgyptERA)— which is responsible for providing information to subscirbers and raising awareness — has not properly fullfilledt its duties in this regard on the updated price hikes and how bills are calculated. But more importantly, it has not taken any steps to question the increase in prices paid by subscribers, nor has it clarifiedwhether any measures were taken to limit these increases or substantiate justifications provided by the electricity ministry regarding the increases in tariffs and the how they affect different consumption brackets in order to protect subscribers, especially the extremely poor to middle income households.

The electricity sector’s transparency must be improved immediately, and subscribers must be provided with detailed data regarding the prices at which they buy electricity:

2.Ease the burden on extremely poor to middle income subscribers

3.Devise a program to increase energy efficiency of buildings and appliances