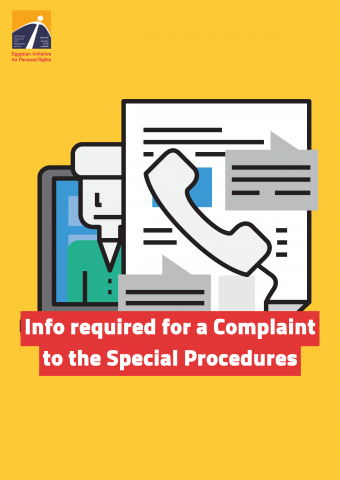 I.Checklist for Interaction with the Victim

a. The Rapporteur determines whether the complaint falls within his mandate

b. Effort is made to verify the information and seek additional details if necessary

c. The Special Rapporteur reaches out to the Government of the State where the alleged violation is thought to have occurred

i.Urgent Appeals (for ongoing violations): Government urged to respond as soon as possible

ii.Communication (for violations that have already taken place): Government urged to respond within 60 days

If the Special Rapporteur receives new allegations, he may send a follow-up communication to the State

d. Replies by the Government are confidential until the publication of the joint communications report to the Human Rights Council three times per year (March, June, September)

2-Identity of the Victim

a. The identity of a victim will always be included in any contact between the Special Rapporteur and State authorities

i.The source of information or the victim may request that the victim’s name not be included in public reports

b. If the victim is a minor (under 18), the SR will include the name in the contact with the state but not in any subsequent public report

a. Unlike Treaty Bodies or International Court mechanisms, the Special Procedures do not require

i. That a State has ratified a particular treaty

ii. That domestic remedies have been exhausted

a. The Special Procedures cannot enforce their views or recommendations

b. The purpose is to:

i. Draw the attention of Governments and others to the alleged human rights violations

ii. Ask that violations are prevented, stopped, investigated, or that remedial action is taken

iii. Report to the human Rights Council on communications sent and replies received

a. Sources should provide the consent of the alleged victim(s) / close relative / legal representative indicating that

i. They know and agree that the information on their case be submitted to the SR

ii. They understand the consequences of a possible action by mandate-holder

II. Checklist for the Complaint

1-Identification of the alleged victims

2-Identification of the alleged perpetrators of the violation (if known), including substantiated information on all the actors involved, including non-state actors, if relevant

i. Date of arrest

iii. Forces who carried out the arrest

iv. Did they show a warrant or other decision by a public authority?

Authority who issued the warrant or decision

3-Date, place, and detailed description of the circumstances of the incidents or violation

a. Circumstances of the arrest

b. Duration of the detention

c. If there was torture

i. Methods of torture used

ii. What injuries were sustained as a result of the torture

iii. What was believed to be the purpose of the torture?

iv. Did a doctor examine the victim?

v. Was the medical examination performed in appropriate manner?

vi. If the victim died in custody, was an autopsy conducted?

a. What internal steps, including domestic remedies were taken, especially with the legal and administrative authorities

i. If complaints were filed: when, by whom, and before which organ?

What steps were taken in response to complaints filed?

b. Indicate whether there have been investigations by State authorities

i. If so, what was the outcome of these proceedings?

5-Identification of the persons or organizations submitting the communication, if different from the victim (this information will be kept confidential upon request)

‹ Failed recovery: How Switzerland released the funds of a famous Egyptian crony The Egyptian Initiative for Personal Rights’ Position on the Death Penalty ›