“In the name of the People”: EIPR publishes its third annual report on death penalty in Egypt 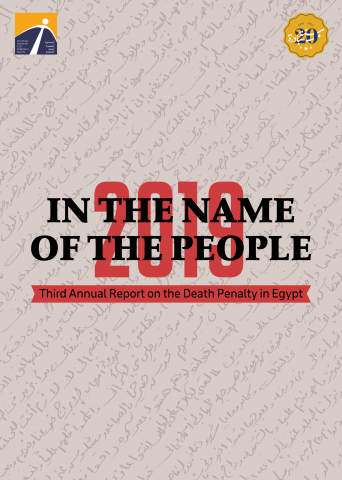 Egyptian Initiative for Personal Rights publishes the English translation of the Third Annual Report on the Death Penalty in Egypt, which was initially published in Arabic on the 28th of October 2021. The report presents and documents death penalty sentences issued in Egypt in 2019 in cases that the research team was able to gain access to. Further, it attempts to provide an analysis on patterns regarding the use of the death penalty in Egyptian courts and the qualitative and quantitative changes with regards to resorting to this most severe penalty under Egyptian criminal law. The report also monitors any legislative amendments or changes that have occurred in its time frame.

In its first chapter, the report monitors death sentences issued in 2019 on the basis of case files and court documents that the research team was able to obtain. These include verdicts issued by first instance criminal courts at the first degree of litigation, final verdicts issued by the Court of Cassation and cases in which executions were carried out on defendants, whether they were issued by a civilian or military courts. The chapter reviews the details of three cases, in which executions were carried out by prison authorities, two cases in which the Court of Cassation upheld the death sentences and one case in which the death penalty was handed out by a first instance criminal court. In addition, the chapter reviews one military case, in which an execution was carried out and three other military cases, in which the Supreme Court of Military Appeals upheld death sentences against civilians.

The second chapter monitors patterns of violations that some of the defendants that were sentenced to death in person were subjected to during the course of the case, including the pre-trial investigation period. In our view, these violations raise questions on the integrity of the investigations and verdicts of those cases. The violations include enforced disappearances, allegations of physical torture to coerce confessions, absence of lawyers during pre-trial investigation periods, ignoring or stalling requests made by the defendants to be  referred to the forensic medicine to prove allegations of toture, and finally, filming and publishing videos showing the defendants giving confessions during the investigation period. All of these violations are a grave breach of fair trial procedures, yet the court sentenced the defendants to death.  In its final chapter, the report proposes a number of recommendations concerning the death penalty and its use in criminal law with the aim of slowing down this rapid escalation in resorting to the most severe punishment in Egyptian criminal law, one that is irreversible once implemented.