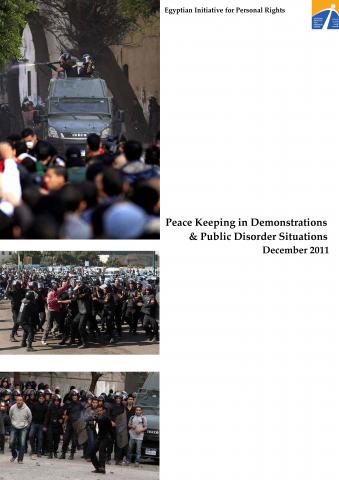 Policing demonstrations and managing public disorder are subject to minimum standards agreed upon internationally. These rules apply to both police and military forces carrying out police duties, and are contained in International Conventions and standards, most notably the United Nations (UN) Basic Principles on the Use of Force and Firearms by Law Enforcement Officials  and the UN Code of Conduct for Law Enforcement Officials . Exceptional circumstances such as internal political instability or any other public emergency may not be invoked to justify any departure from these basic principles.

1. Security agencies' role is to protect citizens' right to life, liberty and security.  Action by security agencies must be intended to ensure public safety, to prevent disorder or crime and to protect the rights of others.

2. Citizens have the rights to peaceful assembly and demonstration.

a) Proportionate to the lawful objective to be achieved and to the seriousness of the offense;

b) Lawful, which means it must conform to the national laws and regulations as well as to international standards;

c) Necessary, which means that force and firearms should be used only when other means remain ineffective or without any promise of achieving the intended result,  and only to the extend required;

d) Accountable: this means that procedures should be in place to report any use of firearms and any death or serious injury resulting from the use of force. Internal review should follow the reporting to ensure the use of force was legitimate. It also means that both the officer giving orders to use illegal force and those obeying the order are criminally liable.

4. In all cases, firearms – birdshots, rubber bullets and live ammunition - shall not be used against persons except in self-defense or defense of others against the imminent threat of death or serious injury, to prevent the perpetration of a particularly serious crime involving grave threat to life, to arrest a person presenting such a danger and resisting their authority, or to prevent his or her escape, and only when less extreme means are insufficient to achieve these objectives.
Whenever the lawful use of force and firearms is unavoidable, law enforcement officers shall minimize damage and injury, and respect and preserve human life.

5. Intentional lethal use of firearms may only be made when strictly unavoidable in order to protect life.

What these Principles Mean in Practice

If the demonstration is peaceful but unlawful

If the protest is unlawful but peaceful, security forces should avoid any use force in dispersing it, or, where that is not practicable, shall restrict such force to the minimum extent necessary.

In all cases, the use of force should be proportionate to the aim, and minimize damage and injury. For example, if a group of 20 demonstrators are holding a sit-in in a public garden, it is disproportionate to use tear gas to disperse them.

The use of firearms to disperse a peaceful demonstration is illegal.

If protesters are using violence

If people amongst the protesters use force, for example throwing stones or molotov cocktails at security forces, law enforcement officers may use force only to the extent necessary, while minimizing damage and injury.

Security response should also discriminate between those protesters using violence and peaceful protesters, and seek to isolate those using violence while protecting peaceful demonstrators.  In any case, using indiscriminate force against anyone present in the area where the violence is taking place is illegal.

Only if the level of violence used by demonstrators poses an imminent threat of death or serious injury are security forces allowed to use firearms and live ammunition, and only to the extent necessary.

If civilians use violence against demonstrators

If one or more civilian uses violence against peaceful demonstrators, then the security forces' role is to arrest those committing these crimes and prevent further violence. Therefore, the security forces have a duty to arrest any civilian using violence against a demonstration, whether by throwing stones at demonstrators or using any type of firearms. Failure to do so when it is within their reach is a breach of their duty and may constitute a criminal offense under Egyptian criminal law.
In all cases, the security forces' role is confined to making arrests and officers should never take any punitive action against civilians.

When there is an attack on public or private property

Security forces' role is to protect public and private property. In doing so, the same rules for the use of force and firearms apply. This means that the use of force should be lawful, necessary and proportionate to the objective to be achieved. Firearms should only be used if there is an imminent threat of death or serious injury; breaking into private or public property does not, in itself, represent such a threat.

The protection of public property can never justify the intentional use of lethal force.

• It is strictly forbidden for security forces to throw stones or any other items at demonstrators, even if the demonstrators are throwing stones at them. Security forces dispersing demonstrations should not under any circumstances have swords or other weapons that are not authorized by law.

• It is strictly forbidden for security forces to use physical force against a person unless it is strictly necessary. Beating someone who is not offering resistance, who is on the ground or unconscious, or sexually assaulting someone is a criminal offense liable of imprisonment. When committed by a law enforcement officer, the penalty is aggravated.

• It is a criminal offense for law enforcement officers to use threatening, abusive or insulting language or behavior.

• Police action should target the person responsible for the breach of the peace.  Targeting any other individuals is unlawful, including the targeting of journalists and citizens taking pictures or videos of the events.

• It is forbidden to use non-lethal incapacitating weapons in a way that may cause death or injure uninvolved persons.  For example, birdshots and rubber bullets should not be fired directly at the upper part of protesters' bodies. Tear gas should not be excessively used and should never be used in enclosed spaces or fired directly at protesters. Use of tear gas in residential areas should be restricted.

• Shooting live ammunition at someone's head or chest can never be justified unless it is a situation where this person is about to kill or severely injure someone – for example pointing a loaded gun at someone, and when this is the only way to stop him or her from doing so.