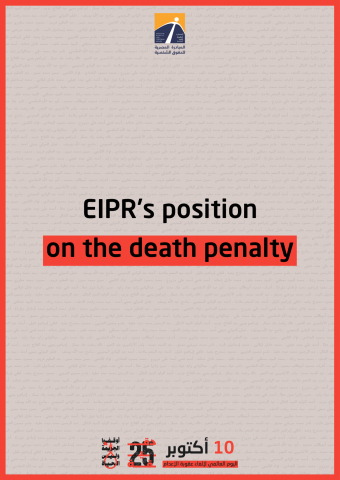 The Death Penalty in Egyptian Law

The Egyptian Initiative for Personal Rights (EIPR) opposes the death penalty in principle and in all cases without exception, because it constitutes a grave violation of human rights, does not achieve the desired deterrence, and is not enjoined by Islamic law (shari’a) as commonly perceived. This paper explains EIPR’s position against the death penalty in detail and affirms the need to realize justice by ending crime, not life.

EIPR condemns the Egyptian government’s adherence to the death penalty and urges it to sign and ratify the second optional protocol of the International Covenant on Civil and Political Rights (ICCPR), which seeks a moratorium on the death penalty.

There is a growing global trend toward the abolition of capital punishment. As of the end of December 2016, a total of 104 states had abolished the death penalty for all crimes. Among the 104 is Djibouti, a member of the Arab League and the only Arab-Islamic state to do so, and all member states of the European Union (EU), which are obliged under Article 1 of Protocol 13 of the European Convention on Human Rights to abolish the death penalty.

In addition to the abovementioned nations that represent more than 70 percent of the world’s nations, an additional seven states have abolished the use of the death penalty for ordinary crimes, reserving it for exceptional circumstances. Another ten states have declared a moratorium on the execution of death sentences, which means they have suspended all implementation for at least ten years. These states include five Arab nations: Algeria, Morocco, Mauritania, Comoros, and Tunisia. In total only a minority of 57 states around the world continue to apply the death penalty.

The Death Penalty in Egyptian Legislation

In April, however, appeal procedures were amended to allow one trial before the felony court and one appeal before the Court of Cassation, during which the court would address the substance of the case. The goal of the amendments was to expedite litigation, but this is not necessarily a positive goal. On the contrary, reducing the avenues for judicial proceedings and cutting out the opportunity for a retrial, especially in capital cases, could threaten the course of justice, due process guarantees, and defendants’ rights.

Islamic Law does not Enjoin the Death Penalty

As for the role of capital punishment in Islamic law, the shari’a does not enjoin the death penalty. On the contrary, the conditions for punitive retribution are so strict they are virtually impossible to meet. The case for punitive retribution can be established in one of two ways: either the testimony of two witnesses of good repute or the personal affirmation of the accused. In regard to the first method, the witnesses’ testimony must be entirely consistent in all details; no contradictory statements are acceptable. The witnesses must also have directly seen the incident in question—the murder, for example—without relying on statements from other persons.

Moreover, one of the most important conditions is the absence of doubt, as its existence would nullify the verdict altogether. If the judge, for instance , has the least doubt about the testimonies to the crime, it is his right—indeed, his legal obligation—to not issue a sentence of punitive retribution on the basis of those testimonies. Meeting such stringent conditions is virtually impossible in practice. The second method is a personal affirmation. The defendant must affirm his commission of the crime before the judge, with guarantees that he has not been subject to torture, threat, or any pressure whatsoever during questioning.

In addition, Islamic law allows for clemency, not by an act of the judge, but of the aggrieved parties. For example, if the family of a murdered person decides to pardon the murderer, the latter would  not be killed. Instead, the killer pays a sum of money determined by the victim’s family and the case is concluded. This practice has been seen in a number of Arab states, including Libya and the UAE.

The Death Penalty is a Violation of Human Rights

In addition to violations related to judicial proceedings, the death penalty is a per se violation of human rights, insofar as it infringes the first and most basic right: the right to life.

Article 6 of the ICCPR states, “Every human being has the inherent right to life.” Similarly, Article 59 of the Egyptian constitution states, “A secure life is the right of every person.” This is further affirmed by Article 4 of the African Charter on Human and Peoples’ Rights, which states, “Human beings are inviolable. Every human being shall be entitled to respect for his life and the integrity of his person. No one may be arbitrarily deprived of this right.”

The Death Penalty is not a Deterrent

The death penalty does not deter individuals from committing crimes in the future, whether ordinary or political offenses. Regarding ordinary offenses, Ivan Šimonović, assistant UN secretary-general for human rights, has said there is no evidence that the death penalty deters crime. Navi Pillay, the former high commissioner for human rights, commented in a publication issued by the OHCHR in 2012 that any suggestion that the death penalty has a deterrent effect is exaggerated. Discussing the lack of any evidence for deterrence, the publication noted, “…the death penalty’s perceived deterrence effect has been overstated and manipulated for decades.”

The current high commissioner for human rights, Zeid Ra’ad al-Hussein, said in March during a high-level discussion convened biannually in Geneva, “The severe mental and physical suffering which are inflicted by capital punishment on the person concerned and family members should now be added to the weight of the argument,” explaining this as “another reason why the death penalty should be abolished, besides its capricious and often discriminatory application and its failure to demonstrate any deterrent effect beyond that of other punishments.”

Regarding extraordinary crimes, there is similarly no evidence of the death penalty’s deterrent effect. For example, Ben Emmerson, the UN special rapporteur on human rights while countering terrorism, has said, “Resorting to this type of punishment to curb terrorism is illegal as much as it is futile. There is a lack of persuasive evidence that the death penalty could contribute more than any other punishment in eradicating terrorism. The death penalty is also an ineffective deterrent because terrorists who are executed may just gain in prestige as may their cause.” During a UN General Assembly forum to discuss the death penalty in 2012, speakers noted that organized crime groups make “calculated decisions and believe that detections and convictions are unlikely,” while “those who commit terrorist acts for political ends…are often prepared to die for that cause…[and] unlikely to be deterred by the death penalty.”

EIPR again calls on the Egyptian government to end the use of the death penalty, by suspending the execution of sentences already issued and refraining from issuing any new sentences. EIPR also holds the Egyptian government wholly responsible if it executes persons later proven innocent, and it reaffirms that genuine deterrence will come through a radical overhaul of state institutions. The state must also treat all international conventions against the death penalty with due seriousness and comply with international and local human rights standards.