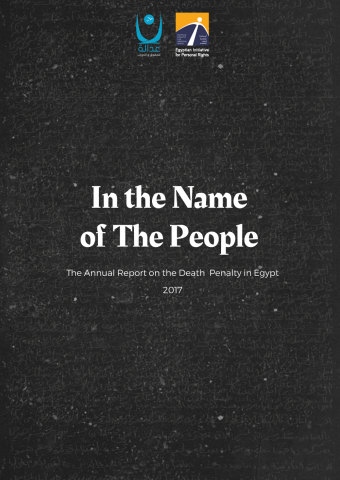 The Annual Report on the Death Penalty in Egypt 2017

Chapter I of this report documents the death penalty verdicts that were issued in 2017 and which the research team managed to gather from the court documents, whether issued by the court of first instance or by the court of Cassation, or whether by a civil or military court according to the chronological order of issuance. This chapter contains details of some of these cases, including 5 cases in which the Court of Cassation has upheld death sentences, eight cases in which the death penalty were issued in civil courts, and two cases where the Supreme Military Court of Appeals has upheld death sentences against civilians.

Chapter II monitors the patterns of violations inflicted upon some of the defendants sentenced to death during the proceedings. At least 32 defendants in 8 cases were forcibly disappeared, while the prosecution began investigations with at least 50 defendants, despite the absence of their lawyers during these initial interrogation periods. At least 42 of the defendants sentenced to death retracted their previous confessions as having been the result of torture, the courts documented the presence of physical marks on the bodies of at least 13 defendants during trial, and at least 22 of them asked to be examined by forensic medicine. Moreover, the Ministry of Interior filmed and published videos of 11 defendants confessing during the interrogations. Finally, documented are the complaints of poor prison conditions made by at least 22 defendants who were eventually sentenced to death.

This series of reports aims to shed light on the provisions of the death penalty and act as a reference for preliminary information on this penalty in Egypt in light of the relative scarcity of such information, as part of the effort and campaign to abolish the death penalty in Egypt. The report will also monitor patterns of human rights violations in some capital punishment cases throughout the year, which in itself constitutes a violation of the right to life.

‹ Eye on Debt II: The second report monitoring the economic and social impact of the IMF loan