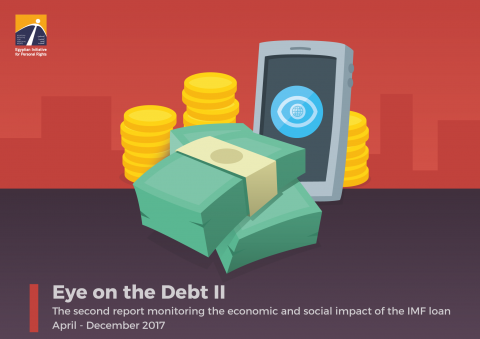 Under the terms of the IMF program and the first review report issued by IMF experts in September 2017, the Egyptian government was obligated to carry out 17 measures to address economic problems in the period from April to December 2017.

The IMF visits, designed to assess the performance of the Egyptian government, take place every six months and determine the disbursement of the next tranche of the loan. The next visit is scheduled for April–May 2018. Thus far Egyptian has obtained $4.13 billion from the IMF as part of the program.

The objectives which the government failed to meet in the second review period include:

2. Providing a comprehensive picture of all government loans of all types.

3. Drafting a medium-term strategic plan for public spending and resources.

The EIPR has reservations about several of the measures required by the IMF that may have deleterious effects on the economy and social stability with no tangible economic benefit, most significantly:

1. Raising the interest rate despite its failure to contain the inflation set off by the floating of the pound. To reduce the pressure on the price of the pound, it would be better to address the causes of dollar outflows abroad while rescheduling the public debt with a lower interest rate.

2. Increasing fuel prices on the household sector alone. It would be preferable to not exempt energy-intensive industries and services from the price increases and require these sectors to obtain energy at market prices.

3. The decision to institute a VAT on its own. The VAT should have been coupled with a package of progressive taxes on income and profits to provide additional revenues to defray the deficit while achieving tax justice. In its recently released second review report, the IMF advocated a package of fairer taxes.

This is the second in a series of shadow reports, issued to coincide with each visit by the team of experts from the International Monetary Fund. The first report noted the IMF’s failure to anticipate the magnitude of the depreciation of the Egyptian pound, as a result of which inflation increased to about double the projected rate. The first report also criticized the increase in the interest rate and its marginal effect on inflation, correctly predicting an increase in the deficit.

“ Eye on Debt,” issued by the Egyptian Initiative for Personal Rights, seeks to monitor the economic measures imposed by the IMF loan program and their impact, positive and negative, on the economy and citizens. It also identifies the measures the government failed to carry out and attempts to offer alternatives that are less onerous for the public, especially low-income groups.