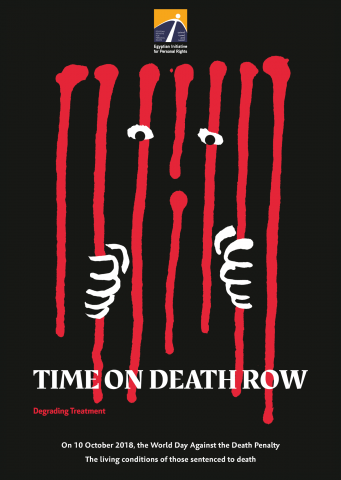 On 10 October, 2018, the World Day Against the Death Penalty will focus on the living conditions of those sentenced to death.

WHAT IS  “DEATH ROW”

Death row is typically characterised by these three factors:

The typical Egypt death row inmates usually spend their time: isolated from the general prison population and held in solitary confinement size of 1.5mx2m, without a toilet or adequate lighting or ventilation. They are only allowed out of the cell for 15 minutes a day to ‘walk’ and to empty the bucket they use as a toilet,  they spend as much as 23 hours and 45 minutes a day alone in their cell in a state of constant uncertainty over when they will be executed.

ٍThere are no official figures of how many people are currently on death row in Egypt and estimates, based on some official announcements, media reports and testimonies can vary widely. According to one estimate by to The Cornell Center on the Death Penalty Worldwide estimate, at least 2,000 individuals were on death row in Egypt in 2017.

Inmates sentenced to death are usually exposed to the same environment as the general prison population, but their conditions of detention are worse, they are often victims of serious human rights violation and in many cases, these violations receive little, to no, exposure or access due to the lack of visibility for inmates on death row.

Therefore,in addressing the patterns of violations associated with death sentences, one of the angles associated with this punishment is the daily treatment and living conditions imposed on prisoners waiting for the execution of the sentence. Regardless of the prospect of execution, the imprisonment of those sentenced to death in itself inflicts considerable physical and psychological harm.

According to the UN Standard Minimum Rules for the Treatment of Prisoners (Nelson Mandela rules), Article 7 of the International Covenant on Civil and Political Rights , Article 5 and Article 4 of the African Charter on Human and Peoples' Rights, and Article 1 of the Convention Against Torture and Other Cruel, Inhuman or Degrading Treatment or Punishment.

1. Freedom from torture or other cruel, inhuman or degrading treatment;

2. Respect for prisoners’ dignity and value as human beings;

5. Clean and adequate living conditions, including sleeping and bathroom accommodations;

In Egypt as well as in many other jurisdictions, many of those basic prisoners’ right are frequently violated for prisoners on death row.

"A DEATH BEFORE DYING" Case studies from Egypt

Abu al Qasim Ahmed Ali Yousef, case no.1300/2016 Cairo Felonies, Known in the media as the “Assassination of the Public Prosecutor” case

"I’m suffering psychological damage because my health can’t tolerate prison, especially since Scorpion Prison isn’t fit for human beings. Once I passed out in solitary confinement because I have high blood pressure and low calcium and need to follow a specific nutritional plan which is unavailable in prison."

According to the families of the three imprisoned men, the prison administration conducted a search on November 2nd 2017, during which they stripped the defendants of all their belongings, including extra underclothes and canned food, and then beat and insulted them and shaved their heads, for no apparent reason.

The families also complained that the prison administration harasses them during visits, making them wait more than 90 minutes to see their family members for no more 15 minutes each month, whereas visits are supposed to last one hour.

(A message written on a napkin by Mohammed Youssef and Gamil Khamis, death row inmates at al-Abaadiya Prison)

Fadl El Mawla Husni Ahmed Ismaeel, case no.27868 of 2014, Montaza criminal Alexandria-Egypt, known in the media as the case of “ “the violent events of Al-Montazah”.

"He is in the Execution Cell but it really shouldn't be called that. They should rename it to the Death Cell, It's like a cemetery. About a metre-and-a-half by three metres, with three people or solitary confinement, always underground. It has a small window with little to no light coming in and no toilet, save for a bucket," Mrs Morsy says.

Lotfi Ibrahim Ismail Khalil , case no.22 for the year 2015/Tanta Military Felonies, known in the media as the case of “Bombing Kafr El Sheikh Stadium”.

Lotfy’s father Ismail received the news his son would be hanged within hours, “Even death they snatched away from us.” Lotfy’s father says.

"As soon as I walked in I saw two people from his case who were executed and Lotfy wrapped in a blanket," he says, visibly emotional as he describes the harrowing scene."I kissed his forehead, then the other people I knew, going from one corpse to the next, crying and kissing their heads and feet."