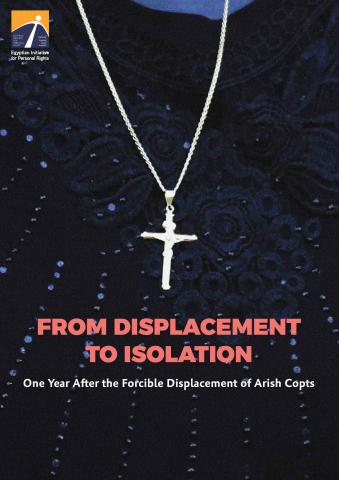 One Year After the Forcible Displacement of Arish Copts

It has been one year since Coptic citizens were displaced from Arish amid violent attacks that targeted many inside their homes. The violence spurred an exodus from the city as Copts fled the killing, leaving behind everything they owned and going to several nearby governorates or regions where they had relatives. At the time, state institutions denied that this exodus was displacement. In statements, Minister of Social Solidarity, Ghada Wali said that the displaced persons would return to Arish in two or three days, demonstrating a lack of understanding of the magnitude of the crisis, which was later reflected in state interventions to ensure justice or restitution for the victims.

In this report, “From Displacement to Isolation: One Year after the Forcible Displacement of Arish Copts,” the Egyptian Initiative for Personal Rights documents the living conditions of displaced Copts, looking at any assistance offered by state institutions and whether any genuine measures have been taken to realize justice and provide restitution to these citizens. To coincide with the report, the EIPR also released a short film including the testimonies of victims from their current places of residence in the governorates of Ismailiya, Cairo, and Giza. The EIPR offers the report and film footage to both official institutions and civil society to encourage them to assume their responsibility for bringing justice, holding those responsible to account, and providing reparations to the victims.

Earlier, in May 2017, the EIPR issued a report, “A Death Foretold: An Analytical Report on the Killing and Displacement of Arish Copts.” That report examined incidents over a six-year period up until the last week of February 2017 in which Copts in North Sinai were publicly targeted. Forms of intimidation ranged from the prohibition of worship, the burning of churches, attacks on property, and abductions for ransom to forced displacement and identity-based killings.

By the end of January 2017, Copts were being targeted with increasing frequency. Six incidents were documented that resulted in the murder of seven Copts. The spate of killings began on January 30 with Wael Youssef Qaldas, who was killed in broad daylight in his shop on July 23 Street, a major thoroughfare in downtown Arish. They ended with the death of Kamel Raouf Kamel, known as Kamel Abu Roumani, on February 23.

The attacks were notable for their extreme violence: Copts were targeted in their homes, some of the bodies were burned, and their homes were looted before being torched. The victims came from several different neighbourhoods. The perpetrators of the attacks also took the victims’ mobile phones, which gave them ready access to a database of names and telephone numbers of other Christians in the city.

In its previous report, the EIPR stated that events in Arish could only be considered in light of Egyptian legal and constitutional principles or international norms accepted by the state and sanctioned as legally binding. Additionally, the events could only be described as forced displacement carried out by militias or paramilitary groups against a religiously homogeneous group with the objective of removing them from their homes. The process should not be dismissed as voluntary departure or a collective flight from armed conflict. The EIPR also noted that security and local authorities’ actions during this crisis failed to meet their constitutional, legal, and international obligations to protect the fundamental rights of Egyptian citizens in this area, most importantly the right to life, property rights, and the right not to be forcibly displaced. Moreover, the long time-frame over which the events unfolded allowed ample opportunity to anticipate and effectively plan interventions to provide protection.

This latest report, “From Displacement to Isolation! A Year after the Forced Displacement of Arish Copts”, is divided into two parts.

The first examines the conditions of the very few Christians who remain in Arish, the attacks that have occurred since the mass displacement through the end of February 2018, and the living conditions of Copts displaced in other regions. Part two analyses the interventions of government bodies aimed at ensuring justice and identifying the perpetrators of the attacks, providing restitution in the form of compensation commensurate with the harm sustained by the victims, and, prior to this, adhering to disclosure standards by recognizing the magnitude of the problem and taking the necessary actions to mitigate this harm.

For this report, the EIPR relied on documented attacks on Copts still residing in Arish; interviews filmed by EIPR researchers with several displaced families in Suez , Cairo, and Giza governorates; and dozens of televised statements and interviews with victims and religious and executive officials.

The EIPR found that: