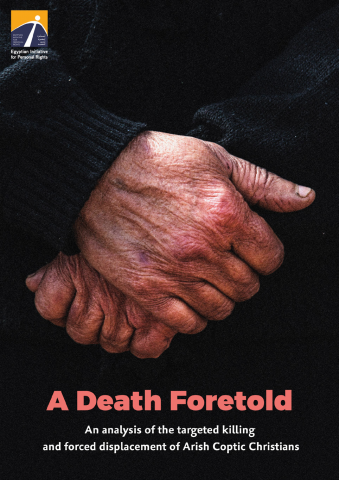 Chronicle of a Death Foretold is the title of a novel by Colombian novelist Gabriel García Márquez, who is known for style of magical realism.  The novel tells the story of two brothers driven to commit a murder to avenge their family honour.

Over 24 hours, the brothers spread the word of their intention to kill around their village in the hope that one of the villagers will warn the victim and lift the burden of committing the crime off their shoulders. But no one informs the man, either out of disregard for the brothers’ intent, out of fear of them, or simply because no one felt it was their concern. The inevitable result, known to all in advance, is that the two brothers kill the poor victim in his home, with everyone watching.

In February, Egypt was the site of events similar to “Chronicle of a Death Foretold,” but with killers and victims of flesh and blood rather than characters in a world of magical realism. The killers in this case did not spare any effort to declare their intention, doing so not only over one day, but over months and years. Nobody cared about that declaration, whether out of disregard, fear, failure, or a conviction that the matter did not concern them. The inevitable result on the ground, as in the novel, was that the killers carried out their threats in broad daylight and in the presence of everyone.

This report documents various ways in which North Sinai Governorate’s Coptic have been targeted. The report covers the past six years until the end of February 2017 and documents intimidating ranging from preventing the practice of religious rites, burning churches, attacking property, kidnap-for-ransom, to forced displacement and identity killings. This report attempts to put the most recent events in a broader context. Considering growing sectarian violence in its various forms; the increasing influence of extremist armed Islamist groups in North Sinai; and the failure to provide the necessary protection mandated by the 2014 Constitution, relevant laws, and international human rights norms, this report describes how Copts are facing direct threats despite availabile means of protection within the state apparatus.

The report is divided into five main sections, plus its recommendations and annexes.

The first section presents a historical background on the development of sectarian violence in Egypt since 25 January 2011. It documents the main patterns of this violence while focusing on the role of customary reconciliation sessions, and related practices of displacement, as an illegal mechanism for resolving such conflicts.

The second section discusses the security, political and social situation in North Sinai, which helps describe the security developments during the same period: confrontations between the state and a number of armed radical groups. The section examines the repercussions of this security situation on the lives of Copts in the region.

The third section includes an analysis of the killings and forced displacement that took place in February.

Finally, section five provides an overview of the most important violations committed against the Copts of North Sinai during the crisis.

The report concludes with a number of urgent recommendations aimed at securing displaced Coptic families, protecting their properties, and enabling them to return to their homes, as well as regarding the prosecution of perpetrators, fair trial rights, and other basic citizens rights.

The report also includes four annexes. The first explains the report’s methodology in collecting and documenting testimonies. The second includes a summary of all cases of displacement documented in the report. The third includes the testimonies of the displaced and their families as collected by EIPR researchers. And the fourth provides an overview of the evolvution of armed groups in Sinai, including the development of their objectives and tactics.

We offer this report to all legislative and executive bodies; to all civil society organizations, whether human rights organizations, relief organizations or charity organizations; and to various media professionals. By addressing these events in their historical context of deep rooted sectarianism, discriminatory practices, economic and social marginalization, and the absence of public freedoms, this report aims to assist the above parties and contribute to a reflection on effective solutions to ensure these crimes are not repeated in the future.