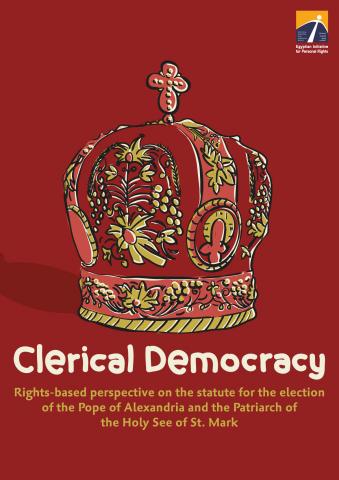 In a study titled “The Democracy of the Clergy,” the Egyptian Initiative for Personal Rights issued Monday, a commentary on the proposed bylaws that criticizes the church’s drafting of the statute in closed, non-transparent consultations based on a narrow interpretation of Article 3 of the revised 2012 constitution, which affirms the right of non-Muslim adherents of the revealed religions to choose their own spiritual leaders. The synod interpreted this provision as giving the church the exclusive right to draft the rules governing this selection process. The EIPR previously criticized Article 3 in its commentary on the proposed constitutional revisions for circumscribing individual freedoms in favor of religious institutions.

The outcome of this practice, based on a vague constitutional provision, is significant for many reasons. The draft statute makes several discriminatory distinctions among Coptic citizens by narrowing the base of potential papal candidates and allowing members of the Holy Synod to engineer a candidate list. It also discriminates against electors on the basis of social origin, gives clerics wide berth to interfere in the selection of electors, and contains no guarantees for representation for women and youth.

“The election or selection of the Coptic Orthodox pope is no longer a matter whose importance is limited to the clergy,” said Ishak Ibrahim, an officer for EIPR’s Freedom of Religion and Belief Program. “Rather, it is a public Christian and national issue that requires a set of rights and standards to guarantee the independence of the religious establishment. Decision-making within the religious establishment must not be subject to the interference of outside parties or a higher authority, and at the same time, the church itself should not be allowed to play an authoritarian role for its members. In the end, this serves to protect freedom of religion and belief.”

The commentary is divided into three parts. Part one looks at the conflict over the rules for the selection of Coptic spiritual leaders since the relationship between the church and the state was first codified, as well as significant moments in this conflict. The second part examines the most important provisions in the proposed bylaws through a comparison with the current statute in force, dating from 1957. The final part offers a critique of the formal aspects of the proposed statute, especially as regards discrimination between Coptic citizens in papal candidacy and elections and the limits of the church’s authority to draft rules regulating the selection of Coptic spiritual leaders pursuant to Article 3 of the constitution, which is ambiguous.

The commentary reflects EIPR’s interest in examining transformations in the relationship between official religious institutions and the state and is part of its attempt to highlight ambiguities and confusion in the constitution that open the door to broad violations of religious freedoms.