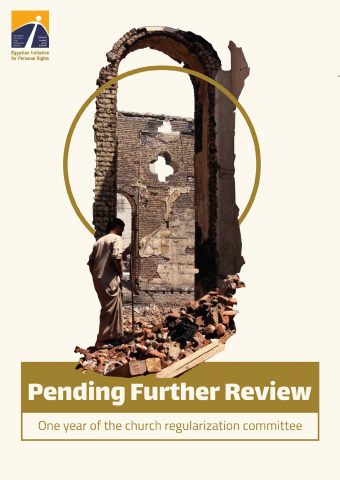 "Pending Further Review" One year of the church regularization committee

It has been one year since the committee for the regularization of churches’ status began work. Under Law 80/2016 on the construction of churches, the committee is tasked with granting existing, functioning churches all necessary permits, thus legalizing their status. The deadline for the submission of applications for status was September 28, 2017. A total of 3,730 applications were filed on behalf of churches and religious services buildings that already existed, regularly hosted religious services and rites, and were known to state institutions. Over the past year, the Cabinet has issued two decrees approving several applications.

The same period also saw the closure of existing churches that had filed applications for licenses with the committee. This spurred much criticism from Christian religious leaders and citizens who complained that the state was not complying with the terms of the church construction law. That law explicitly states that functioning churches that do not receive official licenses or do not meet the licensing conditions should nevertheless remain open and be permitted to continue offering religious services.

In this report, the Egyptian Initiative for Personal Rights documents the work of the regularization committee over the past year, reviewing the two decrees issued by the committee and offering a documentary narrative of the sectarian attacks and security violations connected to Christian citizens worshipping in existing churches that submitted the necessary papers to the legalization committee.

The report covers the period from September 28, 2017, the end of the deadline for the submission of applications for legal status, to the end of October 2018.

The report relies on official prime ministerial decrees published in the Official Gazette relevant to the regularization committee, dozens of testimonies obtained by EIPR researchers from the site of sectarian attacks, along with statements obtained through telephone interviews. We also rely on court documents for cases in which the EIPR intervened on behalf of victims of these attacks.

With this report, the EIPR continues its campaign in support of the right to worship and the right to build houses of worship without restriction. In November 2016, the EIPR issued a report, titled “Closed on Security Grounds: Sectarian Tensions and Attacks Resulting from the Construction and Renovation of Churches,” examining the findings of legal and field research into the difficulties Christian citizens face in exercising the right to worship, which the church construction law failed to grasp in their entirety. It was hoped that the campaign and the study—organized and issued to coincide with the parliamentary debate of Law 80/2016 on the construction of churches—would help to clarify the magnitude of the crisis and spur the competent government bodies, MPs, civil society organizations, and religious institutions to assume their responsibility to ensure that implementing the law did not further hinder the construction of churches. It was also hoped that these efforts would lead to the future revision of inadequate legislation.

Nearly a year after the law was adopted, in December 2017, the EIPR issued a new report, “As You Were: The Law on the Construction and Renovation of Churches One Year Later.” That report documents and analyzes the application of the law with a view to determining whether the law had helped resolve sectarian tensions related to the construction of churches and discrimination in the right to worship. The EIPR also evaluated the role of major actors based on a reading of decrees for the establishment of new churches, the formation of the church legalization committee, and incidents of sectarian tension that year.