The launch of a position paper titled "Despite expected continuity of the pandemic, Covid-19 is missing in government fiscal plans" at the beginning of the new fiscal year 20/21

In the year of the pandemic, as the World Health Organization called it last March, when millions lose their jobs and their basic living, the government chooses to cut spending on food subsidies. Despite the exhaustion of the health system, headed by doctors and nurses in government hospitals, the government chose to complete its neglect of the constitutional minimum spending on health. 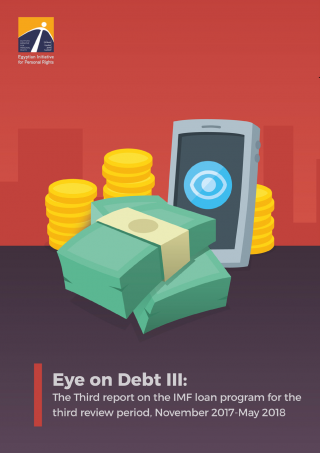 The report assesses the economic and social impact of the economic adjustment program, agreed upon by the Egyptian government and the International Monetary Fund as a condition for Egypt’s receipt of $12-billion loan under the Extended Fund Facility, to be disbursed in six tranches.

“Eye on Debt III”, third in a series of shadow reports on IMF experts’ visit

The EIPR reiterates its reservations on most of the IMF loan terms, which have adverse socioeconomic impacts on most citizens and are damaging to the economy and social stability.

Release the Public Budget to the People… Now!

Continuing with the blackout approach by the regime, the Minister of Finance presents the 2013-2014 draft budget to the Shura Council without making it available to citizens.