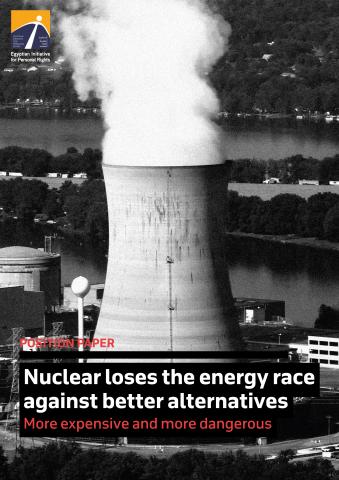 The world no longer looks at nuclear energy as it once did. Since the mid-1990s, the percentage of nuclear-generated energy has been steadily declining around the world, as states that once adopted it have abandoned it for better alternatives.

But some people still believe that nuclear energy provides electricity cheaply and safely for human health and the environment, blazing a path toward progress and development. As the flaws and risks of nuclear energy have become apparent over time, evidence against this view has accumulated. Nuclear energy is a costly source of electricity with adverse impacts on health and the environment, and it carries potentials of substantial risks.

Egypt’s Strategy for Sustainable Development 2030 aims to achieve energy self-sufficiency and sustainability and to diversify energy mix by including, among other things, nuclear energy. Although energy diversification is good in principle, the choice of energy sources should depend on their economic and social feasibility, environmental sustainability, and their appropriateness for the conditions and resources of each country.

The world can do without nuclear energy altogether, as there are better alternatives to meet energy and electricity needs. Renewables top the list of these alternatives around the world and in Egypt specifically.

Nuclear-generated electricity is the most expensive

The nuclear industry has long claimed that while the up-front construction cost is high, ultimately nuclear plants produce the cheapest electricity. But this claim, which relies on out-of-date and biased analysis and estimations has been proven false by numerous recent studies. Recent research shows that nuclear energy companies lose money.

In 2017, Westinghouse—the biggest nuclear power plant company in history—filed bankruptcy. The state-owned French Areva reported losses of $12.3 billion, and the shares of nuclear energy companies in Germany, the UK, France, and Korea have lost 75–89 percent of their value. Half the nuclear plants in the US have racked up losses of $2.9 billion, according to Bloomberg.

Comparing electricity costs using the levelized cost of electricity (LCOE), which measures construction, operation, and fuel costs of a given power plant over an assumed lifetime, the average price per megawatt hour (MWh) of nuclear energy is about double that of combined cycle and solar PV plants and three times that of wind farms, according to a 2017 report from the US Energy Information Administration (EIA).

Nuclear energy is the most costly source of electricity, and the world is tapering off investments in it in favor of renewables. 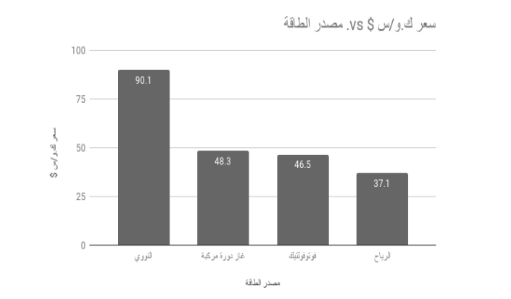 Caption: Comparison of average price of electricity from different sources

Nuclear energy is not clean energy. Every aspect of nuclear fuel cycle generation releases radioactive materials into the air, water, and soil. While the laws permit nuclear facilities to release “low” levels of radiation, on the grounds that this is safe, this has been proven false.

Since the 1980s, researches and reports have been released around the world documenting a higher incidence of cancer, particularly among children, among people living near nuclear installations. This was the case in the Sellafield site in the UK, Dounreay in northern Scotland, Durham in Canada, La Hague in France, Michigan in the US, and elsewhere.

The well-known 2008 KiKK study presented conclusive evidence of a strong correlation between child leukemia and residence near nuclear reactors. The German study included all types of cancers at all 16 of Germany’s nuclear reactor sites, finding that leukemia was 2.2 times more prevalent at these sites than elsewhere.

A report from a US national committee to research the impact of low levels of radiation, issued after years of work, found that there is no “safe level” of ionizing radiation and that women and children are most at risk from radiation.

That the law permits exposure to low levels of radiation does not necessarily mean it is safe. There is no safe level of radiation.

Nuclear reactors require enormous quantities of water for cooling—more than any other type of power plant. For example, a nuclear plant producing 1,000 MW requires 75,000 to 1.8 million liters of water a minute, depending on the reactor’s cooling system.

Drawing such a huge quantity of water, heating it, and then releasing it with pollutants and sediments into nearby waterways has severe adverse effects on water systems, biodiversity, and water quality.

Dabaa is located in the Mediterranean Sea in one of the most unique marine environments in the world and Egypt, with high water quality and biodiversity. It is feared that the nuclear power plant will adversely affect area ecosystems, water quality, and economic activities already existing in the region.

Nuclear waste continues to accumulate without any long-term solution in sight. It is estimated that by 2020 some 445,000 tons of high-level nuclear waste will have been produced around the world. This waste is a million times more radioactive than “fresh” uranium fuel and stays radioactive for thousands of years.

There is no place in the world with a long-term storage facility for highly radioactive nuclear waste. Radioactive materials are simply stored in temporary pools and dry barrels around the world.

The accumulated waste poses a real risk of radiation leakage and environmental pollution. There is long list of accidents caused by the improper disposal of nuclear waste or the theft of such waste from temporary storage facilities.

More than 70 years after nuclear energy first began; there is still no solution for its waste byproducts, which will be left as a dangerous legacy to the coming generations.

Nuclear facilities are a potential source of extreme risk

At any time, nuclear reactors could slip out of control due to a combination of technological failure, human error, natural disasters, or even military targeting.

The nuclear industry estimates that the chances of a major disaster like Fukushima are low—once every 250 years—but other analyses by respected bodies such as MIT say that there could be at least four serious accidents by 2055, ETH Zurich estimates a 50-percent likelihood of a Chernobyl-size accident (or bigger) in the next 27 years.

But the risk of accidents should not be measured solely by their frequency or infrequency, but also by the magnitude of their impact. The effects of nuclear accidents are huge, whether in terms of direct casualties, the chronic illnesses and cancers they cause, or the grave social and economic consequences.

A UN report on Chernobyl issued in 2000 notes that some 8 million people were exposed to radiation and that a half million children still live in the affected areas in Ukraine. Some 73,000 people suffer from permanent disabilities, and 46,000 of the 200,000 workers who helped in the clean up became totally incapacitated as a result. In some areas, incidence of thyroid cancer has increased 100 fold.

Ukrainian experts estimate the economic damage to Ukraine at some $200 billion. For the sake of comparison, the GDP of Ukraine in 2001 was $37 billion.

Egypt and the components of a nuclear industry

Egypt currently does not possess the necessary components of a nuclear industry. It owns no uranium nor the technology to utilize it and will rely long term on a foreign partner for its supply and use which makes Egypt’s energy security subject to political considerations. Egypt also lacks trained experts on all levels and in all sectors able to administer a complex project like nuclear power plants, particularly since the conditions for personnel building are currently also lacking, according to nuclear energy experts. These experts believe that no real renaissance can be achieved without reforming the system of education and scientific research in Egypt.

The organizational and legal infrastructure for safe nuclear energy is still lacking. The capacities of nuclear regulatory bodies are weak, even compared to their peers in neighboring states. Recent amendments of related laws further weakened the Nuclear Regulatory Agency. It is worth mentioning also that Egypt has not ratified the Convention on Nuclear Safety, although it signed the treaty in 1994.

There are better alternatives to meet electricity needs

We can do without nuclear energy. In fact, there are much better alternatives to meet electricity needs, with renewable energy at the top of the list, along with natural gas in the transitional phase. Whereas uranium and fossil fuels will be depleted in a matter of decades, renewable resources are unlimited. They are also cheaper and safer for the environment and human health. Technological improvements have lowered the cost of renewables around the world. By the end of 2017, it was estimated that wind energy, followed by solar PV energy, were the cheapest of all energy sources for electricity generation.

More than other countries, Egypt is well placed to take advantage of solar energy using photovoltaic cells and solar concentrators around the world and it has good resources for wind energy. In addition to the emerging new natural gas resources.

An analysis of the renewable energy map issued by the International Renewable Energy Agency (IRENA) in 2018 found that Egypt has the capacity to generate 53 percent of its electricity from renewables by 2030. This would lower total energy costs by $900 million annually.

12. Annual report on water quality data from the coastal waters of the Mediterranean Sea Year 2000,

15. Massachusetts Institute of Technology, The Future of the Nuclear Fuel Cycle,

16. MIT Technology Review, “The Chances of Another Chernobyl Before 2050? 50%, Say Safety Specialists,”

22. “President of the Atomic Energy Club: We Must Reconsider the Economic Feasibility of the Nuclear Plant (interview)” (in Arabic),

23. Wikileaks, Public library of US diplomacy,

24. “This is not the safe road to al-Dabaa: On nuclear safety requirements and procedures,”

25. “EIPR objects to nuclear energy laws and demands that nuclear plant contracts not be signed before laws are reviewed,”