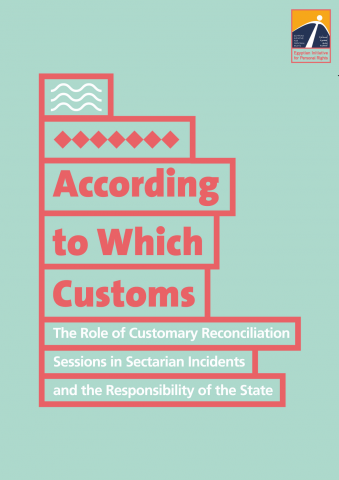 The Role of Customary Reconciliation in Sectarian Disputes and State Responsibility

The study, titled “Whose Customs? The Role of Customary Reconciliation in Sectarian Disputes and State Responsibility,” focuses on the period from January 2011 to the end of 2014. Having witnessed the rule of the Supreme Council of the Armed Forces and Presidents Mohamed Morsi, Adli Mansour, and Abd al-Fattah al-Sisi, this period saw profound constitutional, political, and cultural transformations that had the potential to bring about the end of the discrimination that prevailed socially and was protected constitutionally and legally and held out the promise of guarantees for the exercise of freedom of religion and belief and other related rights and liberties. This period also saw clear failures on the part of law enforcement and security authorities and at times a total incapacity to perform their legally and constitutionally mandated missions.

From the January 25 Revolution to the end of 2014, the EIPR documented some 45 sectarian attacks resolved through the instrument of customary reconciliation. This number does not represent all sectarian attacks and disputes seen in Egypt in this period. This list also does not include the looting and arson of churches, religious facilities, and Copts’ property that followed the dispersal of the sit-ins in Rabia and al-Nahda Squares, which inflicted varying degrees of damage on more than 100 Christian religious facilities. As such, the study does not address the grassroots mobilizations to protect some churches in this period. Nor does this number represent all incidents that were resolved through customary reconciliation; this number includes only those cases in which the research was able to document and confirm information about the incident, the causes, consequences, and how it was resolved, as well as obtain statements from parties to the conflicts and arbiters in the reconciliation sessions.

“Six additional reconciliation sessions have been held since the beginning of 2015,” said Ishak Ibrahim, an EIPR researcher and officer for the Freedom of Religion and Belief Program. “There seems to be no change in the state’s support for solutions that overall foster religious discrimination and, in contrast to its claims, heighten sectarian violence.”

The study begins with a quick overview of the relationship between the state apparatus and the Coptic community in the era of former President Hosni Mubarak, highlighting significant problems that persisted even after he was deposed.

It then looks at various types of sectarian disputes, distinguishing six major categories:

1) conflicts over worship and the public exercise of religious rites;

3) disputes related to freedom of expression in religious matters;

The study then offers a quantitative and qualitative analysis of the operation of customary reconciliation sessions, examining their geographic distribution and how their distribution is related to various political developments and outcomes, as well as how they are constituted and operate in sectarian disputes and the contrast between customary reconciliation as used in sectarian disputes and as used in other civil or criminal disputes. Finally, the study offers a rights-based reading of the outcomes of these sessions in light of the Egyptian constitution and laws and international rights conventions ratified by Egypt.

In the study, the EIPR finds that the weakness and inability of state institutions to perform their duty to protect social peace and the lives and property of citizens leads some citizens to turn to these customary reconciliation instruments as a means to resolve disputes they fear could have grave repercussions, particularly in light of the various kinds of sectarian and religious tension prevalent in numerous parts of the country.

The EIPR also found that the security apparatus plays a variable role in these customary sessions, ranging from nominal participation to convening the sessions in police stations or security directorates to full sponsorship of the session and active participation in setting the terms of reconciliation. Some sessions resulted in unlawful decisions that clearly violate the rights of the weaker party. The security services have also played a negative role when it comes to the construction of churches, in many cases forcing Christian citizens to suspend church renovations or expansions or the inauguration of mass in new churches pending security approval, which never comes. In other cases, security leaders and military commanders—the latter when the army was responsible for maintaining security after the January 2011 revolution—turned to local Salafi leaders to persuade assailants to desist in their attacks in exchange for guarantees of non-prosecution.

The study also examines the role of the Public Prosecution. In most cases of attacks on Coptic property, no one is prosecuted, while in cases where the offender is Christian, they are taken into custody. The prosecutor’s office often uses customary reconciliation as grounds to suspend criminal prosecution, in violation of the Code of Criminal Procedure, which specifically enumerates the crimes in which such reconciliation is acceptable and dictates that other crimes must be subject to criminal prosecution.

According to the study, reconciliation sessions in cases of sectarian disputes have evolved into a sort of customary judicial system that operates differently in different areas. This system is organized into quasi-stable circuits and adjudicates disputes based on customary precepts acceptable to various parties of the dispute. In general, sessions convened in connection with sectarian attacks have no established composition or universally recognized rules. When this is combined with the Public Prosecution’s readiness to accept the terms of these sessions in violation of the law and subsequently close investigations in most cases, it becomes clear that these reconciliations undermine the basic human right to a fair trial, enshrined in international law and the Egyptian constitution.

The EIPR notes that there is nothing wrong with social mechanisms on the local and national level that help to defuse sectarian disputes and attacks; such interventions are important and necessary. But in all cases, these instruments should supplement various legal actions citizens are entitled to take. It is the state’s duty to ensure that these legal actions are enforced and accessible and protect those who turn to them from any infringement of their other rights.

The study notes that in many cases reconciliation sessions helped to defuse sectarian tension and prevent the dispute from snowballing and spreading further afield, especially given strong religious and sectarian identification and its use to mobilize and polarize supporters and adherents. But this was also a major factor contributing to the recurrence of sectarian attacks.

The EIPR concluded that customary reconciliation instruments have strayed from their original purpose for several reasons:

1. With time, these sessions have evolved into a parallel judicial system competing with the official justice system, and customary reconciliation has become a means to evade the enforcement of the law. This is because in these sessions the side with the greater tribal or group presence can impose its own terms, which in some cases explicitly include penalties for those who would exercise their constitutional and legal right to seek redress with the courts. Some justice officials have participated in this by not applying the law and accepting reconciliation terms without considering the gravity of crimes committed, which include murder, the looting of public and private property and houses of worship, the possession of firearms, and other acts criminalized under the Egyptian Penal Code.

2. These sessions lack a vital principle essential to their effectiveness in containing sectarian disputes: the consent of both parties to the dispute to resolve the disagreement through customary reconciliation. As we found in many cases, the security and executive authorities and the stronger party use their power to compel the weaker party to participate in the sessions, convened under the terms of the stronger party. As such, state institutions, which should ostensibly protect citizens’ rights, become a party to the dispute.

3. Reconciliation sessions only engage superficially with the manifestations and causes of sectarian disputes. Instead of examining the roots of the problem in a local context and attempting to resolve it, they simply attempt to stop the attacks, even temporarily, without considering terms that may prevent the situation from blowing up yet again. With the exception of one session, none prescribed any cultural, social, or political activities that would help to create common ground for dialogue among citizens. With time, this tendency toward simplistic solutions only stokes the problem, fostering resentment and eroding the Coptic community’s loss of confidence in state institutions.

4. Some sessions dictated unjust, unusual terms. One agreement required residents of a village in the Minya governorate not to leave their homes for 15 days, even to go to work or shop for daily necessities. Another appointed a committee comprised of parties to the disputes to sell off the property of a Coptic family that had been banished from their home in Sharabat in the Alexandria governorate. Other reconciliation agreements contained terms constituting grave violations of rights upheld in international human rights conventions and the Egyptian constitution, and this under the auspices of state officials. These include the freedom of religion and belief, freedom of worship, freedom of opinion and expression, the protection of property rights, and the freedom to seek redress with the courts. This essentially codifies social discrimination and entrenches the stratification of citizens on the basis of religion.

5. The organization and leadership of reconciliation sessions is now monopolized by specific groups, either circles close to local governance structures or the former ruling party or people who enjoy wide financial and tribal influence in the region. Members of the now dissolved National Democratic Party played this role prior to the January 25 Revolution, after which members of the Muslim Brotherhood and al-Gama’a al-Islamiya took their place. After Mohamed Morsi was deposed, the role again reverted to powerful families and former parliamentarians. These sessions are used politically to curry favor and popularity, both with state officials and local residents.

The EIPR stresses the need to invigorate legal and judicial instruments and urges institutions of local governance, religious institutions, and various partisan and civic forces to work to ensure that when customary reconciliation is used, it becomes a means to support social cohesion rather than further entrench sectarian divisions.