"Without guarantees" A study on nuclear energy and El- Dabaa project 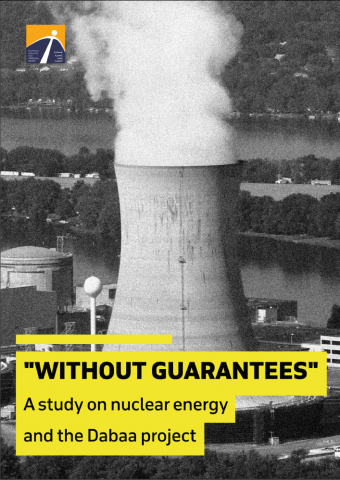 The consequences of using nuclear energy affect the whole society and the future generations. International recommendations rightly stress on community participation, knowledge spreading and transparency in all matters related to nuclear energy. However, we think that the process of public participation concerning El Dabaa Nuclear Plant in Egypt was not satisfactorily done. This could be, at least partly, attributed to the complexity of the issues of energy in general and nuclear energy in particular.

This study seeks to provide simplified information on various aspects of nuclear power for the sake of facilitating and enriching the public dialogue and participation in the issues of nuclear energy in Egypt. The study adopts a position that considers nuclear power an expensive, dangerous, risky and unsustainable source of electricity and that better alternatives exist, especially renewable energy. Renewable resources would guarantee energy security and accessibility while protecting health and  environment.

Based on findings from international and local resources and data. The study consists of an introduction, an executive summary, seven chapters, and two annexes. Each chapter can be read independently, and each chapter begins with a summary of its content.

The study begins by explaining the basics of nuclear electricity generation. Generation of electricity from nuclear power is similar to other thermal generation like that of coal, natural gas, and oil except that in this case heat is created from nuclear fission and not from burning fuel. The nuclear reactor is the core of the nuclear plant. It is responsible for generating and controlling the release of heat. There are several kinds of reactors, applying different techniques. It was announced that the Russian company "Ross Atom" will build  four reactors of the model 1200-VVER (Russian pressurized water reactor) in El Dabaa.

The basic fuel for a nuclear reactor is Uranium. Natural uranium passes through different stages of enrichment before it can be used in the reactor. Six countries supply 85% of the world’s mined uranium. The economic uranium stores are expected to last for about 80 years only. The nuclear fuel inside the reactor is replaced periodically because it gets spent. This spent fuel is highly radioactive. Hundreds of thousands of tons of high level radioactive waste are stored beside the reactors all over the world. Up till now no safe long term disposal of this waste exists.

Nuclear power is the most expensive source of electricity compared to all traditional sources and  to most renewable sources. The argument against nuclear energy is no longer restricted to risks and dangers but is increasingly based on costs and economics. The nuclear industry has long argued that nuclear reactors might be expensive to build but because the operating costs are very low, nuclear electricity is the cheapest. This claim has been continuously undermined by recent cost analyses.

“Comparing the levelized costs of electricity (LCOE), shows that the cost of nuclear power is almost double that of combined gas cycle and  the PV cells, and triple onshore wind .”

That is why the nuclear power industry worldwide is facing huge difficulties in the markets. Investing in nuclear energy is becoming very risky due to the huge capital, the construction delay, the budget overruns and the cheaper alternatives.

“Comparing the cost of building the nuclear plant in Dabaa to costs of building other power plants in Egypt shows that the Dabaa plant cost  is almost 12 times that of a combined gas station, 6 times a wind farm and 3 times a photovoltaic solar plant of the same capacity.”

“The recent amendments of the Egyptian Nuclear Laws and Regulations grant the Dabaa plants lots of subsidies.”

Nuclear energy is not considered clean energy. Every aspect of the nuclear cycle carries risky consequences on health and environment. The operation of nuclear plants produces large quantities of radioactive materials. A fraction of this activity is typically emitted to the environment. Laws regulating nuclear activities allow the release of low ratios of radioactive materials to the surrounding environment assuming that low radiation levels do not affect human health, but this assumption is incorrect.

“Since the 1980s populations living near nuclear facilities have been complaining of increasing cancer cases especially among their children, studies confirmed this phenomenon.”

Yet the relationship between increased cancer cases and nuclear facilities was denied for a long time and still is .

“But in 2006 an important study from the :American National Council Committee to Search for the Effects of Low Levels of  Radiation, clearly proved that there is no safe dose of ionic radiation no matter how low.”

“The Eastern Mediterranean Region, where Dabaa is located, is one of the most suitable marine areas in the world for swimming and fishing, the construction of a nuclear power plant in Dabaa, will negatively affect water quality, ecosystem diversity and the economic activities that depend on them.”

While more nuclear waste is accumulating around the world, there is no long term solution in sight.

Deep geological repositories are thought to be the safest way to store nuclear waste, but no country in the world has any of these warehouses. Only Finland started building one to be completed in the 22nd century.

The accumulated waste poses eminent risks of contaminating the environment. There are many records of incidents when nuclear waste has been disposed of improperly, defectively or simply abandoned, washed away or stolen from temporary storages.

“Dumping waste in oceans was not banned till the nineties. Scientists found evidences of raised radioactivity in sea floors and in marine life. The dumped radioactive waste is making its way back to our bodies and food. “

Reprocessing of the used fuel is not a solution for nuclear waste and it may even increase the risk of nuclear weapons proliferation.

Nuclear reactors are, by their very nature, inherently dangerous. At any time, an unforeseen combination of technological failure, human error or even natural disaster may lead the reactor to getting out of control.

The nuclear industry claims that the probability of a major accident like Fukushima is very low.

“But some important research entities estimate that four serious accidents are expected during the next fifty years, and a possibility of another Chernobyl may be 50% in the next thirty years”

There is no authoritative comprehensive public record of nuclear accidents, but many lists of various sorts of accidents are found online. The effects of nuclear accidents are enormous and their consequences include injuries, acute radiation syndrome, chronic diseases and cancers, in addition to devastating social and economic losses. This study provides a summary of the five major accidents known in history namely: Kyshtym, Windscale-Sellafield, Three Mile Island, Chernobyl and Fukushima Daiichi.

There are numerous options available to meet the world needs for electricity that are superior to nuclear energy. On top of these options are renewable energies which are cheaper, cleaner, safer and sustainable.

Wind and solar PV are leading the growth of renewable power. By the end of 2017, wind followed by solar PV were the cheapest of all sources of electricity and most attractive to energy investments.  Affordable storage solutions are  expected in the near future to overcome the variability and interruption of wind and solar powers. Egypt is endowed with abundant wind and solar resources. The IRENA renewable energy map analysis performed in 2018, showed that:

“Egypt has the potential to supply 53% of its electricity from renewables by 2030. This would result in a reduction in total energy costs of USD 900 million”