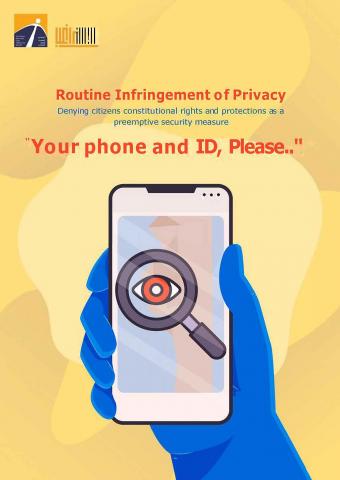 As mobile phone capabilities developed and social media platforms evolved from simply one type of communication and documentation tool to a primary medium for social communication, the transmission and spread of news, and access to information, the security apparatus’s obsession with mobile phones mounted accordingly.

But what happened between 20 September and late October 2019 was an unprecedented development as far as police practice in Egypt and in terms of the magnitude of violation of citizens’ privacy. It seems to have been occasioned by the temporary spread of the videos and live feeds of contractor and actor Mohammed Ali before the demonstrations of 20 September.

During this period, the principal purpose of police presence on the streets was to search the mobile phones of citizens, who were arbitrarily stopped and forced to unlock their phones for an examination of text messages and social media apps, in search of content that might reveal political leanings. Although such conduct was seen sporadically in the past, it was only after the 20 September 2019 demonstrations that ie began to be practiced on such an unprecedentedly large scale, and again in January 2020.

From 21 September to the end of October 2019, stops and forced phone searches accompanied a widespread police crackdown and mass arrest campaign. In most cases in which police found political content on phones, no matter how trivial—satirical comics, for example—and no matter how personal—private messages or personal photos, for example—the inevitable result was the arrest of the person being searched.

In order to prevent| these violations from evolving from an arbitrarily acquired right with no basis in law into a routine police tool used in ordinary circumstances with no public resistance; as was the case with the ban on mobile phones in police stations or the common, but unlawful practice of searching citizens’ cars at nighttime checkpoints, the relationship between these measures and the Egyptian constitution and laws must be demonstrated.

We will also attempt to preempt any further legal arguments that can be advanced by the Ministry of Interior and refute, in detail, any legal basis for the existence of such measures.

This paper will examine the legal framework governing all types of searches, distinguish between different types of searches in the law, explain and the legal status of mobile phones and mobile companies, and provide a narrative of the evolution of this new illegal practice based on some documented cases.