In Facing Covid-19, do we remember the Demographic and Health Survey? (Position Paper) 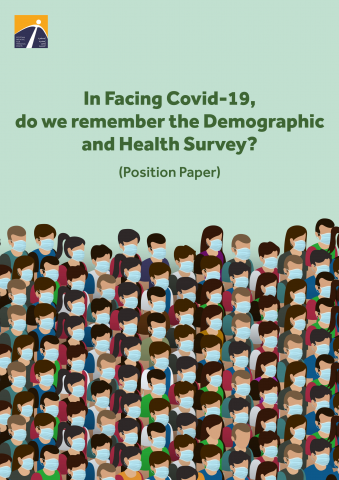 We await with anticipation for  the Ministry of Health and Population daily coronavirus update on the numbers of recovery cases and fatalities. Now, we collectively realize the importance of accuracy and accessibility of health information, as it is what helps many of us, daily, to understand the exact situation we are undergoing, and also allows the government to deal with a crisis of this magnitude, based on recent, precise and scientifically accurate information. This information -when sufficiently available- allows society as a whole, communities, and individuals, to evaluate policies and intervene based on accurate and reliable data.

Despite the absence of data on the number of tests that are conducted on a daily basis, the number of calls received by the hotline, the mapping of the virus spread,, and the age and gender distribution of infections and fatalities, the relevant information and data that are useful in drawing the complete picture; and that are essential to contribute to policy proposals and advise alternative scenarios to face Covid-19. The Egyptian government’s tendency in disclosing some of the information and data it has been gathering, has contributed to establishing a minimum level of confidence between individuals and the Ministry of Health and Population in its response to the Covid-19 pandemic.

For many years, the Demographic and Health Survey (DHS) has been an essential source of accurate and up-to-date data on the status of health and population issues in Egypt, and has been a reliable reference for governmental and non-governmental agencies regarding health and population conditions. Its periodic release was a point of strength that allowed comparison of these conditions from one edition to another to evaluate public policies and determine their efficiency. However, since the circulation of 2008 DHS, surveys were either delayed, or were not conducted or published without explanation.

A large number of civil society organizations and experts repeatedly demanded that the DHS databases be made available periodically and regularly, with a maximum of five-year intervals, as it is typically conducted. This is not a secondary need, but rather essential for state agencies as well as researchers, academics, civil society and individuals, to understand public health status in Egypt and to make and evaluate health policies, based on this data. Moreover, for the state and experts to be able to respond to a crisis such as the one we are in now more effectively.

Reliable research and knowledge sources that can be employed to enact national and local policies in Egypt are scarce. In addition to that, there is the absence of necessary resources and technical mechanisms for the state to conduct similar specialized surveys that reflect the myriad of geographical, economical, social and gendered needs . Here lies the importance of the standard DHS, which is conducted every five years at most. After the publication of the 2008 survey, it was expected that a survey published in 2012 would follow, but data collection and publishing were delayed until 2014, with a gap of six years from the previous survey. Furthermore, the following survey was expected to be published in 2018, however, to this moment it has not been published. DHS 2018 cancellation was announced on the official website of the DHS program.

Cancelling the 2018 DHS without announcing the obstacles to its implementation, leaves us with data from previous years that may not reflect the reality of today. We are analysing the reality based on data collected in the first half of 2014, without updated data detailing health care facilities,  clarifying nutrition and public health behaviors of individuals, and tracking variability in household income indicators, which are then relied on in designing health interventions and economic and social protection programs to reduce the effects of Covid-19 on thousands of individuals and communities. For example, a COVID-19 statement by the Ministry of Health and Population on Wednesday 2 April 2020, showed that children under ten years of age represent 2% of the total number of 779 cases. On the other hand, the 2014 DHS data shows the highest prevalence of acute respiratory diseases among children under five, reaching 15% of children of this age in Upper Egypt countryside. The same data shows that the mothers of these children resort to treating symptoms in ways that are not medically recommended, (for children with acute respiratory disease, they were given less fluid than usual in 58% of cases or they were not given fluid at all in 5% of cases, 6 out of 10 of them were given an antibiotic. The state can rely on such data for targeted social awareness messaging to prevent and limit the spread of COVID-19.

Beyond the current situation, the importance of the DHS, includes, but is not limited to, the localization of sustainable development goals and in their follow-up and evaluation, as well as the dependence of ministries and various state agencies on DHS data in planning and follow-up. Data for this survey helped, for example, collaborators of the "Egypt Vision" 2030 in identifying challenges and setting indicators to overcome them. The 2030 Vision sheds the light on the poor condition of social services as one of the obstacles in achieving sustainable development. According to the data of DHS (2014), families in border governorates are the least likely to access water from safe sources (85%) compared to urban areas. It becomes difficult to follow the development or exacerbation of this challenge today and in the future, especially in light of Covid-19 precautionary measures that require the intensification of personal hygiene! The survey is also the only precise source for monitoring patterns of female genital mutilation (FGM) in Egypt, without which it is difficult to build any strategies to counter FGM or assess the success or failure of previous strategies.

The DHS data also enables us to track the rise or decline of specific societal attitudes towards nutrition, chronic diseases, contraceptives and family planning services, violence against women, social attitudes towards FGM and the potential for occurrence and requirements to address it, childmarriage and its link to reproductive violence and the educational system dropouts, and awareness of sexually transmitted infections.

Finally, one of the most important strengths of the DHS is the comparability of data across surveys, to understand the impact of geographical and social differences on the standard of living of all individuals, and the relationship of education, geographical location and age of the mother to the size of the family. By reading these data, for example, we can understand societal and gender challenges in choosing or refraining from contraceptive methods and their accessibility, and also show us ways to improve the quality of healthcare services .

The DHS Program has provided since 1984 technical support for the design, implementation and review of health and demographic surveys ranging from: Demographic and Health Survey (DHS), AIDS Indicators Survey (AIS), Service Provision Assessment(SPA), Malaria Indicator Survey (MIS), and other forms of surveys and surveys that the program provides to developing countries with financial support from the United States Agency for Development (USAID), at the direct request of the survey implementing countries to cooperate with the DHS mission or through other frameworks of international grants.

[A table of Egypt’s Health Surveys]

Over the course of several years, and with the changing social and political circumstances, the DHS reflected developments and the change of data and research interests in Egypt, which reflect health and societal phenomena. In 1988, it began by focusing on women to collect data on: fertility, maternal and child health, population programs and policies, family planning and contraceptives. Followed by the 1992 DHS which was distinguished by the participation of the husbands of women participating in the survey, to learn about their attitudes towards "family planning services" and their general knowledge of contraceptive methods and their reproductive plans. Following the International Conference on Population and Development in Cairo (ICPD), the1995 survey reflected the heated discussions that took place during preparations for and during the ICPD, for example: violence against women, FGM, abortion, HIV was added to SPA survey (infectious diseases) as one of the distinguishing survey charateristics of the interim and standard demographic health surveys in 2003 and 2005, respectively, carrying the echoes of public health discussions on phenomena such as Avian Influenza (2008) and blood pressure and hepatitis C (2015), social/cultural as male circumcision, gendered such as cervical cancer, and structural such as out-of-pocket health expenditures. Finally, the results of the survey were made available in Arabic for the first time in 2014.

The uses of data from DHS research are not limited to understanding public health behaviors and the health of women and girls but extend to include local, regional and international research and policy guidance in the economy, education, planning and migration. These data can be used to draw and extract highly specific interlinkages and patterns that support urban planning and public policies to achieve spatial and social justice.

In 2016 and 2018, Egypt submitted voluntary reports on the country's endeavors and efforts to achieve the Sustainable Development Goals, at the HLPF (High-Level Political Forum), and stressed the pivotal role of the private sector and civil society entities in achieving Egypt's Vision 2030 and the Sustainable Development Goals. While designing and planning the national strategy for sustainable development, the state cooperated with academics, researchers, and some representatives of civil society, but the platform itself, the participatory policy-making and follow-up, is now inaccessible. The suspension of participation in decision-making represented by the lack of data availability, as is the status of the DHS, is contrary to the state's responsibilities locally and contrary to its international obligations.