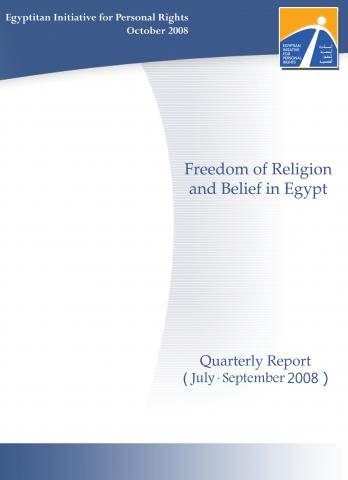 This Report addresses a number of significant developments seen in Egypt in the field of freedom of religion and belief during the months of July, August, and September of 2008. It documents an expansion in the geographical scope of sectarian violence and tensions, reaching from Shubra al-Kheima in Greater Cairo and the district of Atfih in Giza to Naga' Hamadi in Qena, al-Fashn in Beni Soueif, and Samalut and Mallawi in Minya. The report also documents interference by security agencies to prevent night prayers and vigils during Ramadan in some governorates and to unlawfully prevent the renovation of churches in the governorates of Beni Soueif and Qena.

The report reviews several court rulings relevant to freedom of religion and belief during the reporting period, most importantly a decision taking custody of two children, Mario and Andrew Ramsis, from their Christian mother and granting it to their father, who converted to Islam; a ruling sentencing Bahiya al-Sisi to three years in prison on charges of identifying her religion as Christian given that her father had converted to Islam; and a ruling upholding a state decree that refused to recognize a new Orthodox confession.

Also reviewed are some recent reports dealing with freedom of religion and belief in Egypt, such as the report of the National Council for Human Rights regarding the attacks on the Abu Fana Monastery in Minya in May 2008, the U.S. State Department’s report on religious freedom in Egypt, and the annual reports of the Arab Organization for Human Rights and the US-based group Freedom House.