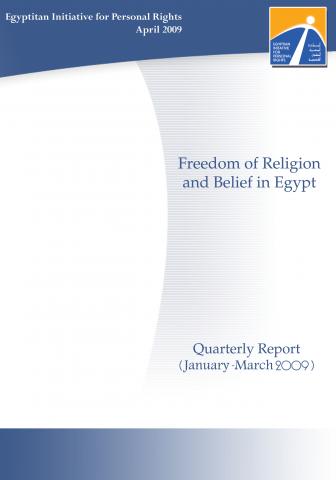 Report Summary- this report documents the most significant developments for freedom of religion and belief seen in Egypt in the months of January, February and March 2009. While observing a relative decline in incidents of sectarian violence between Muslims and Christians in the period under review, Minya continued to occupy the lion's share of sectarian incidents and the report documents two separate disputes that acquired sectarian overtones, both of which took place in villages in the Abu Qurqas district of Minya in February and March. The report also notes a new, distressing development in sectarian violence—the widening of the scope of collective violence to include Egyptian Baha'is—and documents the unprecedented attacks on the homes of Baha'is living in the village of al-Shuraniya in Sohag in late March.

The report also examines the continuing official discrimination against Copts seeking to practice their religious rites, in violation of decrees regulating this aspect of religious practice. In this regard, the report discusses the ruling handed down in a lawsuit filed by church officials in the Akhmim district of Sohag, after they failed to obtain a permit to hold services in a church there despite having repeatedly applied for a permit since 1989. The report also looks at the case of another church in the Maragha district of Sohag where officials have been seeking a renovation permit since 1979. The permit was only granted in February 2009, after one of the church walls collapsed, which destabilized houses adjacent to the church and ultimately led to the death of eight people.

Regarding violations by security services, the report documents the illegal detention of two Christians in February. The two young men were tortured with beatings and electroshocks in the Assyout State Security headquarters after they were arrested at the Book Fair in Cairo for allegedly distributing copies of the Bible to visitors at the fair.

On a more positive note, the report notes a ruling handed down by the Supreme Administrative Court in March upholding the right of Egyptian Baha'is to obtain official identification documents without compelling them to claim affiliation with one of the three officially recognized religions (Islam, Christianity or Judaism). The report also examines the Minister of Interior’s decision to enforce the ruling by revising the Implementing Regulations of the Civil Status Law to include specific provisions for Egyptians who are not adherents of an officially recognized religion.

In another positive development, the report examines in detail the appeal filed by the Public Prosecutor’s Office before the Court of Cassation challenging a court decision to revoke Kamilia Lutfi Gaballah’s custody of her two children, Mario and Andrew Ramsis, after the children’s father converted to Islam. The ruling, which is expected to be issued on 15 June, will constitute a legal precedent for future cases involving custody rights of children born as Christians in cases where one parent converts to Islam.

As is customary, the report also provides an overview of the most significant legal rulings issued in the period under review, in addition to relevant bills and legislation, political developments, pertinent Egyptian or foreign reports and civil society activities related to religious freedom in Egypt.