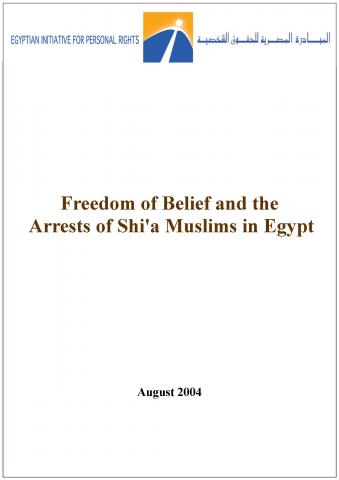 Introduction- This report documents the arrests of Shi'a Muslims that have taken place between December 2003 and March 2004. Two of the victims of this crackdown, Mohammed el-Derini and Mohammed Omar, are still in detention as of this writing. The report's scope was originally to document the human rights violations that accompanied these arrests, from arbitrary arrests and unlawful detention to recurrent administrative detention under the Emergency Law, including torture of detainees by beating and electroshock, and the violation of their right to freedom of religion and belief and to privacy by searching through their religious convictions, and interrogating them about their beliefs and attempting to coerce them into recanting them.

However, in the course of working on these cases and preparing this report, EIPR researchers and lawyers have uncovered that what is happening today is a repetition of a larger pattern that started with the first arrests of Shi'a in Egypt in 1988 and was repeated in 4 subsequent crackdowns.

This pattern started with a sweep of random arrests of individuals whose only common trait is a belief in the Shi'a sect, and continued with subjecting them to different methods of torture in an attempt to extract 'confessions' that might help build a criminal case. Then the time would come for the smear campaign in the press, with its accompanying accusations of foreign agency and threatening national security - after which the case would end and the detainees would be released without trial, after spending up to six months in detention. This has happened at least to 124 Egyptians who were arrested in the five major crackdowns since 1988. Undoubtedly, this number does not include many others who were arrested during the same period but whose plights did not receive the same media attention as those five crackdowns.

EIPR realized that the culture of impunity which allowed human rights violators during these five sweeps to get away without punishment for, or even investigation into, their actions, is what caused these events to be repeated. Thus, EIPR's researchers have decided to document the gross violations that accompanied these five sweeps and publicize what happened during them, and to call for an investigation and for the punishment of those who are proved responsible. This is the only way to prevent these violations from recurring, and to achieve the bare minimum of moral satisfaction for the victims of these violations.

EIPR's Right to Privacy Program considers an individual's right to freedom of religion and belief an integral part of his/her right to privacy. The State's interference in individuals' religious life by interrogating them about their religious beliefs is not only a violation of their right to freedom of belief, but also an invasion of individuals' personal freedom, protected under the Egyptian Constitution and defined in scope by the Supreme Constitutional Court as "what is closest to the personality, inseparably linked with the human self, within the sphere of his life's aspects and his personal choices in their most minute orientations and in their noblest goals."

EIPR is also deeply concerned about what it sees as the State's invading the lives of individuals, dictating to them how they should conduct their religious, emotional and marital lives, then punishing whoever strays from this line the State sets forth for its citizens, including marginalizing and smearing them and calling society up in arms against them, which puts them at risk of violations by society in addition to the violations of the government.

EIPR does not deal with the issue of freedom of religion or belief from the perspective of collective minority rights, but rather from the perspective of the individual's right to self-determination and respect for privacy, which includes the right to choose his/her religion or belief and practice it without interference from the State or society. This approach takes on additional importance in light of the fact that the individuals usually subjected to this sort of violation are marginalized; their voices, and sufferings, tend to go relatively unheard, in contrast to the voices of organized and visible minorities. These marginalized individuals occupy the most urgent area of concern for EIPR.