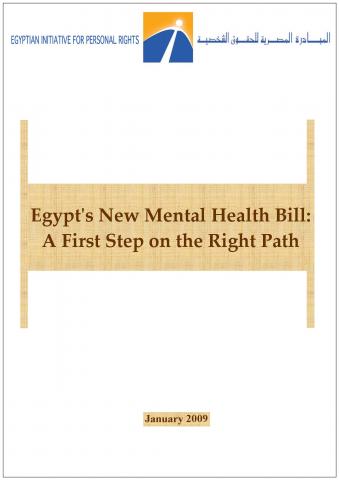 Introduction- In 2008, the Ministry of Health and Population in Egypt announced that it would submit to Parliament a draft for a new mental health law to replace the existing one, which has been in force since 1944. This legislative initiative provides an important opportunity to discuss the issue of mental health from a human rights perspective. The moment also calls for a review of the existing law and its compatibility with the Egyptian government's legal obligations under the provisions of the Egyptian Constitution as well as international human rights law to ensure the highest attainable standard of mental health and the protection of persons with mental disorders from discrimination.

The constitution of the World Health Organization (WHO), adopted in 1946, defines health as "a state of complete physical, mental and social well-being." Since then the organization has continued to stress the interrelatedness of physical and mental health.1  The importance of mental health is also highlighted in the International Covenant on Economic, Social and Cultural Rights, issued in 1966, which affirms "the right of everyone to the enjoyment of the highest attainable standard of physical and mental health." Regional human rights conventions, such as the African Charter for Human and People's Rights, the European Convention on Human Rights and the American Convention on Human Rights, have affirmed this understanding.

Parallel to these conventions and charters, the past decades have witnessed a radical shift in the concept of mental health, its importance and the measures for providing care and treatment to individuals with mental disorders. As noted by the General Secretariat for Mental Health (the division in charge of mental health issues at the Ministry of Health and Population), the new bill comes as a response to those developments. The current law in Egypt was written at a time when successful treatments had not yet been discovered; indeed, this is made clear by the title of the 1944 legislation: "Law for the Institutionalization of Those with Mental Illnesses.” Therefore, the General Secretariat declared, there is an urgent need to introduce a new law that is compatible with contemporary views, scientific developments and the principles of human rights.2  The explanatory memorandum accompanying the bill states that "the concept of treatment for mental disorders has changed to focus essentially on the treatment of the patient and his/her reintegration in society, and to help him/her lead a productive life; and is no longer targeting his/her exclusion and isolation in a mental institution for long periods of time, as is the case in the current law."

This study aims to analyze the proposed mental health law from a rights perspective in order to measure its compatibility with human rights principles and the international standards that guide the practice of the mental health care profession; at the same time, the study considers the status of mental health care in Egypt. The study includes historical background regarding the development of the concept of mental health and mental illnesses and the developments in the fields of care and treatment worldwide. It also addresses the close link between mental health issues and human rights, referring to the most important international standards that protect the rights of persons with mental disorders. The study then addresses in detail the new mental health bill, highlighting its positive aspects in comparison to the present law, and providing concrete recommendations for improvements.