Lawyers at the Egyptian Initiative for Personal Rights (EIPR) submitted a petition to the public prosecutor on November 15, 2017 (no. 13274/2017/public prosecutor petitions) seeking an inspection of the death row ward of the al-Abaadiya Prison, after the families of three people detained in the ward, sentenced to death for involvement in the shooting at the Abu al-Matamir police station, complained about the prison administration’s treatment of their family members and what they described as the ‘inhumane’ conditions of their confinement for more than three months. On July 17th, 2017, the Damanhour Felony Court sentenced Gamil Khamis Saad, Mohammed Youssef Abdulilah, and Mohammed Khaled Abd al-Ati to death in presence, as well as five other defendants in absentia. 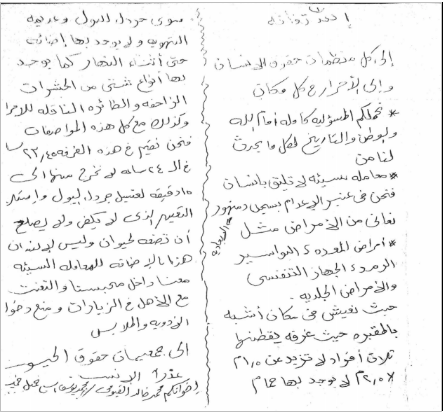 (A message written on a napkin by Mohammed Youssef and Gamil Khamis, death row inmates at al-Abaadiya Prison)

The prosecution charged the defendants with joining a group established in violation of the law, providing it with material and financial support, the attempted murder of a police corporal and others, possession of explosives and weapons, and the willful destruction of buildings and property in the cases involving the shooting at the Abu al-Matamir police station, entered as no. 2001/2015/Central Damanhour Plenary (131/2015/High State Security felonies). The defendants’ lawyers appealed the sentence by the legal deadline.

According to the families of the imprisoned men, the prison administration conducted a search on November 2nd, during which they stripped the defendants of all their belongings, including extra underclothes and canned food, and then beat and insulted them and shaved their heads, for no apparent reason. The families also complained that the prison administration harasses them during visits, making them wait more than 90 minutes to see their family members for no more 15 minutes each month, whereas visits are supposed to last one hour, according to the Article 71 of the Prison Regulations. The family members are searched in a demeaning way prior to the visit and are insulted by the officers. They are often not permitted to bring in food as well as medicine.Article 38 of the law regulating prisons states, “Every convicted person shall have the right to correspond and his family shall have the right to visit him, in accordance with internal regulations. Persons held in pretrial detention shall have this right without infringement, in accordance with the relevant provisions of the Code of Criminal Procedure.”

The families also complain of inhumane conditions in the ward. The three defendants are placed in a small cell in the ward (1.5 m by 2 m, as described by the defendants), without a toilet or adequate lighting or ventilation. They are only allowed out of the cell for 15 minutes a day to ‘walk’ and to empty the bucket they use as a toilet, during the remaining 23 hours and 45 minutes in the cell. As a result, the three defendants have all suffered illness, skin rashes, and eye infections, as described by their families to EIPR researchers. However, the prison administration has refused to let them by examined by doctors at the prison hospital.

Rule 10 of the Standard Minimum Rules for the Treatment of Prisoners states, “All accommodation provided for the use of prisoners and in particular all sleeping accommodation shall meet all requirements of health, due regard being paid to climatic conditions and particularly to cubic content of air, minimum floor space, lighting, heating and ventilation.”

In all places where prisoners are required to live or work,

(a) The windows shall be large enough to enable the prisoners to read or work by natural light, and shall be so constructed that they can allow the entrance of fresh air whether or not there is artificial ventilation;

(b) Artificial light shall be provided sufficient for the prisoners to read or work without injury to eyesight.

While Rule 12 states, “The sanitary installations shall be adequate to enable every prisoner to comply with the needs of nature when necessary and in a clean and decent manner.”

EIPR demands an investigation into the complaints filed by the prisoners’ families concerning the inhumane prison conditions, including report no. 13274/2017/public prosecutor petitions and complaint no. 4427 submitted to the National Council on Human Rights. EIPR holds the prison administration fully liable for the physical and psychological health of the defendants. It further demands that the conditions of their confinement be improved by placing them in cells with toilets, where there is adequate sunlight and ventilation. They should further be allowed additional time for walks and visits, and should also be permitted to go to the hospital to receive necessary medication and treatment.