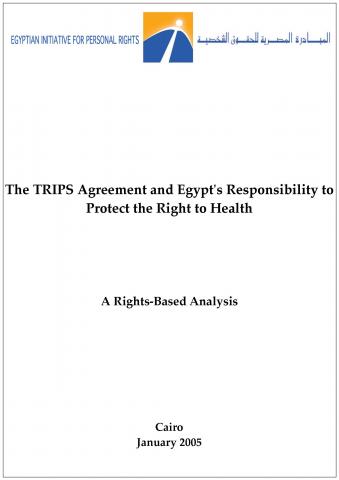 1. Introduction- On 1 January 2005, the agreement on the Trade Related Aspects of Intellectual Property Rights (hereinafter TRIPS) came into force in Egypt, which is now bound by international law to implement its duties under this agreement in order to ensure full protection of intellectual property rights, including copyright, trademarks and patent rights.

A large proportion of modern drugs enjoy patent protection in developed countries, allowing multinational companies a monopoly over the production and sale of these drugs. However, generic drugs (manufactured in developing countries with or without the permission of the patent owner) have been utilised across the third world to reduce prices of essential drugs.

Many of the medicines in the developing world are generic medicines manufactured by a process of reverse engineering in countries such as India or Brazil1.  For countries that have relied on this supply of essential drugs the implementation of the TRIPS agreement will have a retrogressive effect on the delivery of essential drugs.

Even for countries that have generally relied on voluntary licences, such as South Africa or Egypt, the international enforcement of TRIPS limits the options available to the state in the face of a health crisis. Furthermore, for the previously mentioned countries, the reduction in supply of generic medicines from countries with a large generic drugs industry like India and Brazil may have the effect of increasing global prices for medicines which will, in turn, have a negative effect on countries where the local industries rely on voluntary licences.

The policy paper also aims at raising public awareness on the different aspects of the TRIPS and its effects on the right to health in light of the apparent lack of information provided by the government on the issue, and its failure to involve civil society and the public in planning for the phase following the TRIPS entrance into force.