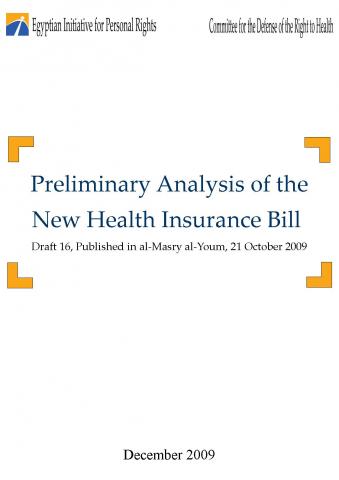 Introduction- The history of health insurance in Egypt began with the establishment of the General Health Insurance Organization in 1964. It was then followed by the issuance of several laws created to gradually guarantee the right to health insurance to all citizens. The underlying principle governing all these laws stemmed from the need to balance the efficient provision of services and a comprehensive health care package, with the fair distribution of the financial burden of illness through the establishment of social and health insurance funds and risk-pooling.

Since the mid-1990s, repeated attempts have been made to reform the entire health system, starting with the health insurance system. However, 50 years after its establishment, the health system still suffers from several weaknesses. Most significantly, citizens are not satisfied with the level of services offered or with the efficiency of those who provide them. In addition, there is a shortage in the availability of insurance services in rural areas compared to urban areas.  Insurance coverage is limited to no more than 54% of the population.

The issue of health expenditure remains at the heart of the existing challenges. Official studies have found that out-of-pocket spending, from both insured and non-insured citizens, accounts for more than 60% of total health expenditure. In addition, public health care spending remains exceedingly low at less than 5% of the total state expenditures.

Over the last decade, several health insurance bills have been drafted, all essentially lacking the comprehensive vision necessary for the nature of change needed to truly reform the health insurance system. None of them fully explored the links between the health insurance system in Egypt with social insurance laws issued at nearly the same time. They also lacked provisions for a fair distribution of the cost of the burden of disease between citizens and state resources.  It could have been possible to fund a system that would embody the principles of social solidarity, equity and accessibility in providing insured health protection to all segments of society through the imposition of direct or indirect taxes.

The last two years have seen intensive efforts to finalize a new bill, dubbed by the government, “the universal social health insurance bill.” It is considered to be one of society's major goals on the road to development and justice. The health system is in dire need for real reform and an alternative, universal insurance system that meets the standards of justice, accessibility, efficiency and quality. Moreover, the reform of the health system should not neglect the link between health insurance and social insurance systems.

Within this context, and before commenting on the latest published draft of the bill, it is important to refer to the "Declaration of Principles" issued by the Committee to Defend the Right to Health in November 2009. In the “Declaration of Principles”, we outlined the principles that govern our stance towards the law, or any other law, and we warn against the dangers contained in some of its provisions.

Hence, we wish to place emphasis on the following:

1. The general principles and objectives to be achieved by the new law must be thoroughly explained; and the terms and concepts used must be clearly defined. The bill should be put forward for a broad public debate involving civil society, political parties, professional syndicates and citizens before being presented to the People’s Assembly. The bill should not pass directly from the State Council (the judicial body tasked with reviewing legislations prior to their promulgation) to the Council of Ministers without first being made fully available to all different social sectors. In an undemocratic, non-transparent move, the government has thus far refrained from releasing the text of the new bill, which differs substantially from the last draft released in 2007. As a result, we have been compelled to deal with the incomplete version of the bill as leaked to al-Masry al-Youm, which may differ slightly or substantially from the final version of the bill.

2. Citizens’ right to health must be respected, including the right to fair, insured health coverage through risk-pooling the burden of disease. Citizens’ right to social insurance as guaranteed by social insurance laws in effect for more than 50 years (Law 79/1975 and its amendments, Law 112/1980 and Law 108/1976 and its amendments) must be protected.  These rights must not be eroded by any new health insurance reforms.

3. The government must assume its responsibility to increase public health expenditure to internationally recommended levels (7-10 % of state spending). The published statement of principles for the 2010-11 state budget sets care for the low-income segments of the society as one of its objectives, but it does not address health care as one of the principal budgetary objectives. This is proof of the state’s desire to place the burden of the new insurance system on citizens.

4. We warn against adopting multiple insurance packages under the pretence of new terminology, such as the "catastrophic illness package", which would deny beneficiaries the rights guaranteed to them by social insurance laws (against disability, sickness, old age, unemployment, workplace injury and death).

5. Any health insurance system must rely on fair, fixed premiums. No additional fees and payments should be levied that obstruct access to services, particularly in hospitals (including for the cost of tests, X-rays, surgery and hospital stays). The state’s budget contribution to the new health insurance system must not be limited to covering only those segments of society which the government considers economically disadvantaged, thus cutting down the state’s actual contribution to the school students' insurance scheme (Law 99) or the program of state-funded treatment (barnamaj al-‘ilaaj ‘ala nafaqat al-dawla).

6. We affirm our support of an integrated health system and universal coverage that does not change the ownership of public health institutions under various guises.

7. We support a fair wage structure for all medical personnel (doctors, nurses and staff) that would guarantee them a dignified life. This is both a basic right and a necessary means of improving the quality of health services.

When these principles are applied to the bill published on 21 October1, it becomes clear that the new government bill contains many of the dangers we have cautioned against. We stress the need to introduce fundamental reforms and amendments to this bill as a national duty, whether inside the cabinet or after the bill’s referral to the People’s Assembly and Shura Council. We urge all social movement to reject this bill if the government insists on submitting it in its current form.

1- The draft contains 32 articles in five chapters; the published version does not contain Articles 12, 16, 19 and 21. No reason was given for the gap, which may have been a publishing error.