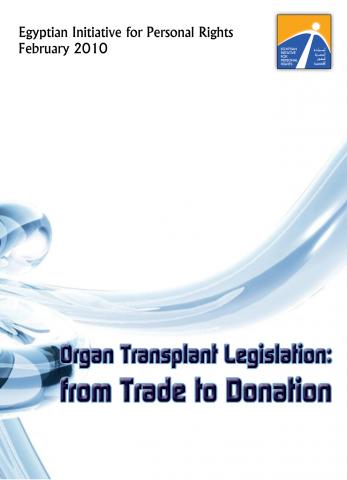 Introduction- Organ transplantation is, without a doubt, one of the most significant achievements in modern medicine. In many cases, it is the only treatment for the late stages of organ failure and chronic heart, liver and kidney disease. Organ transplants continue to give hope to millions of people around the world.

Many countries today engage in organ transplant surgeries, but successful programs in these countries do not necessarily offer an organized method for the procurement of organs from donors of various cultural, religious and economic backgrounds. Rather, a high level of societal awareness particularly among doctors, lawmakers, potential donors and organ recipients is the key to the success of organ transplantation.

Although it is a basic tenet that donation must be the foundation for all organ and tissue transplants, the rarity of organs has given rise to a growing commercial market for organs on the local, regional and international levels. As a result, abuse and exploitation takes place, especially of the poor for the benefit of the rich, and also for the benefit of local or cross-border intermediaries, in what is known as “transplant tourism”. It is considered a flagrant violation of basic human rights, particularly the right to life and the right to health.

The World Health Organization (WHO) has monitored the growing phenomena of transplant tourism, which started to appear in the mid-1990s. Estimates show that it accounts for 10% of all organ transplant practices worldwide.1 Organ trafficking and transplant tourism continue to expand on the local, regional and international levels despite the absence of comprehensive research and documented statistics surrounding the phenomenon. This situation requires nations and their governments to exert greater efforts to limit this phenomenon through the issuance of legislation criminalizing the organ trade. Local, regional and international bodies must also coordinate efforts to stop the spread of the black market in human organs2.

For many years, Egypt has been one of the few countries in the world without legislation criminalizing the organ trade and regulating organ and tissue transplant, particularly from the deceased to the living. Nevertheless, the issue has been the subject of a broad debate amid repeated warnings of “a mafia of organ traffickers,” whose victims are the poor and most vulnerable. Increasingly strong demands have been heard for clear, strict legislation that would regulate the chaos in this critical field in the health sector.

On the other hand, a large proportion of those who urgently need organ transplants in Egypt still have no chance of obtaining the necessary organ because of the high cost of the operation, particularly when performed outside the framework of universal insurance (which covers not only the cost of the transplant itself, but post-op treatment and convalescence as well). In addition, the reliance on living donors as the sole source of organs,  as is the case in Egypt, has created a severe shortage of organs due to the small number of donors, who often fear complications as a result of the transplantation. This ultimately deprives others of their rights to life and health, thus encouraging transplant tourism and the exploitation of those who are vulnerable.

It is in this context, that the Egyptian Initiative for Personal Rights (EIPR) submits this position paper to offer a rights-based perspective on organ and tissue transplant policies as a means by which the state can meet its commitments to the human rights to health and life. In this document, the EIPR stresses the urgency of a legislation that will put a stop to organ trafficking and ensure the availability of this type of health care for all individuals as part of a system of universal insurance. The EIPR recommends that all concerned parties put aside the debate on the definition of death and look at the consequences of further delaying the proposed law. Finally, the EIPR urges policymakers to be mindful of the fact that this law will be of no value if the state does not allocate the funds needed to implement it, monitor its application and encourage society to adopt a culture of donation.