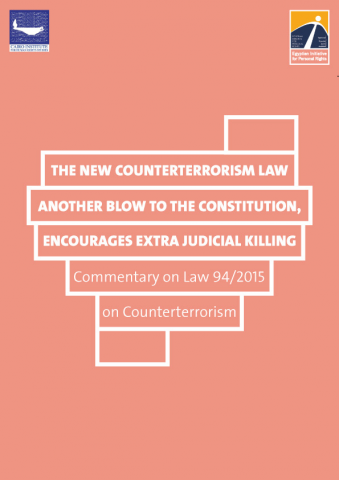 The commentary describes the law as another blow to the constitution that erodes the rule of law and establishes an undeclared state of emergency on the pretext of protecting society and national unity and prohibiting the dissemination of ideas advocating violence. The CIHRS and EIPR say that current security, legislative, and judicial policies exacerbate acts of political vengeance and terrorism instead of containing them; indeed they are part of the problem, not the solution. By exempting law-enforcement personnel of criminal liability for the use of force in the performance of their duties or in defense of lives and property, the law encourages them to use lethal force while ensuring their immunity from punishment.

The law permits the president or his authorized deputy to take any measures, including the imposition of a curfew, in order to “preserve public security and order” in the event of any terrorist danger. Such procedures establish what is in essence an undeclared state of emergency that is not subject to constitutional protections and defies Egypt’s international obligations by manipulating legal terms and language. The president may declare this disguised state of emergency to counter the dangers of terrorist crimes or environmental disasters for a period of six months, renewable indefinitely with the approval of a parliamentary majority.

“The latest law threatens and ‘terrorizes’ political parties and groups, civil society organizations, and the media more than violent extremist groups,” said Mohamed Zaree, the director of the CIHRS Cairo office. “It further shuts down the public sphere in Egypt, which will only help extremist groups to grow and expand. Even worse is the complete lack of effective oversight of law-enforcement personnel given the utter collapse of the justice system in Egypt. In reality, the justice system is not tied down by laws, but by security interventions and the dominant rhetoric of counterterrorism.”

The law expands the scope of criminal acts to a worrying degree by using imprecise language or including unspecified actions, as in Article 2(2), which criminalizes any conduct committed in furtherance of a terrorist purpose. According to the law, such purposes include harming the environment and occupying, seizing, or damaging public or private property. As such, demonstrators protesting in front of government buildings or companies or holding sit-ins in them or on a public road may face terrorism charges. In addition, terms used such as infringing “the public order,” “the safety of society,” “society’s interests,” and “national unity” are general enough to be interpreted in diverse ways depending on the body with the interpretive power.

“The political polarization currently sweeping Egyptian society facilitates branding peaceful political opponents or rights groups as terrorists,” said Gasser Abdel-Razek, the executive director of the EIPR. “That a senior state official, when commenting on a report on the status of human rights a year into the rule of President Abd al-Fattah al-Sisi, could accuse one of the most prominent international rights groups of supporting terrorism demonstrates how easily the charge of terrorism can be applied to critical and independent voices that differ with or criticize the current administration.”

The law also evokes Article 195 of the Penal Code, which previously established the criminal liability of newspaper editors for material published in the paper that was punishable under the Penal Code. In Article 35, the law establishes the criminal liability of the legal personhood of news outlets for news and information published that conflicts with the official Ministry of Defense statements.

Even more seriously, as was the case under emergency law and despite SCC rulings on the unconstitutionality of arbitrary arrest, Article 40 of the new law allows the arrest of persons not caught in a criminal act and without a judicial warrant. Using the term “holding,” the law gives judicial police officials the right to take the statement of the person in holding, present him with the report to the Public Prosecution, and place him in legally designated holding areas. In other words, “holding” in the law is a synonym for arrest. The law also authorizes the Public Prosecution to extend the holding period to seven days and obtain a warrant to search the home of the person in holding.

The EIPR and the CIHRS reiterate that the hand of justice is not shackled by the law, as was suggested by the Egyptian president. On the contrary, the last two years have seen the most extreme convictions in Egypt’s modern history. More death sentences and referrals to the mufti for their approval have been issued than any time, and most final death sentences have indeed been carried out. This is in addition to mass life sentences handed down after trials that do not meet minimum standards of impartiality and fairness. In contrast, there has been a notable, willful failure to end impunity and hold perpetrators of human rights crimes to account. It is this that helps erode—and insult—the concept of justice and exacerbates the problem of terrorism in Egypt, as demonstrated by the new counterterrorism law.