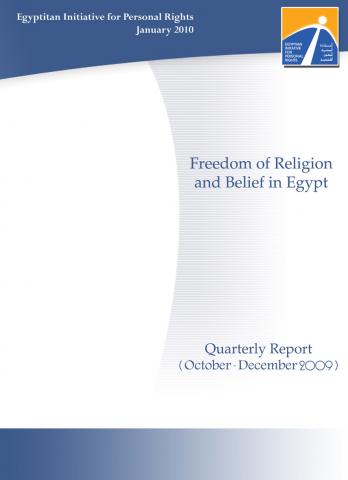 This Report- examines the most significant developments in Egypt for freedom of religion and belief during the months of October, November and December 2009.

This report documents the continuation of sectarian attacks or security interventions and abuses in cases where Christians engage in religious rites in private buildings or are suspected of seeking to turn existing buildings or those under construction into churches. These cases included the demolition of a building owned by a Christian association in Cairo’s al-Abagiya neighborhood; the arrest of a citizen on charges of holding Christian worship services in his home in Deir Salamout in Minya; the posting of a guard detail on a private building in the village of Danasour in Menoufiya; and several problems related to the issuance of government licenses for the construction of new churches or the renovation of existing churches in the district of Abu Tisht in Qena and the Maghagha and al-Adwa districts in Minya.

Regarding court rulings, the report discusses the ongoing legal problems associated with conversion from Islam to Christianity. In the period under review, in two separate criminal cases, two women were sentenced to prison on charges of falsifying personal documents to show that they had converted to Christianity. The report reviews several other court rulings issued in the same period, including a ruling rejecting the registration of the Jehovah’s Witnesses and another rejecting an appeal against the prison sentence of blogger Karim Amer, who was convicted of showing contempt for Islam and insulting the President. Another court order rejected a lawsuit asking that Easter be made an official state holiday.

As usual, the report documents the most significant administrative rulings, political developments, civil society activities and Egyptian and foreign reports connected to religion in Egypt.