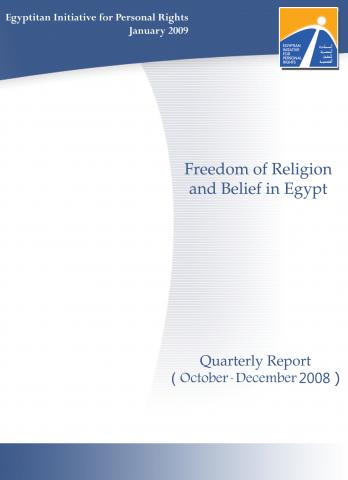 This report addresses several of the most significant developments seen in Egypt in the field of freedom of religion and belief in the months of October, November, and December of 2008. The report observes continued sectarian tension and violence all over Egypt and documents cases in the governorates of Cairo, Alexandria, Qalyoubiya, Sharqiya, Kafr al-Sheikh, Minya, and Luxor. As usual, Minya accounted for the lion’s share of incidents of sectarian violence, with cases in the district of Matay, the village of Kom al-Mahras, and the district of Abu Qurqas, as well as events in the village of al-Tayiba in the Samalut district in October. The latter were the worst of the fourth quarter of 2008, leaving one Christian dead and four other people injured, among them one Muslim. Homes, lands, and property were also torched and damaged.

The report also notes increased tensions and clashes as a result of Copts establishing “service centers” to use for social occasions, prayers, or religious lessons in neighborhoods and villages that have no nearby churches or in cases where Copts have failed to obtain permits to build a new church or renovate an existing church. The report discusses several instances in which the establishment of such centers, or rumors that attempts were being made to convert them into churches, led to sectarian clashes. Events in November in the Ain Shams area of Cairo received the most media coverage in this regard, but two similar incidents took place in the village of Kafr Girgis in the Minya al-Qamh district of Sharqiya and in the al-Iraq village in Alexandria’s al-Amiriya neighborhood.

The report observes the mounting problems resulting from restrictions on the right to change one’s religion, as Muslims who want to convert to Christianity resort to obtaining falsified identification documents. In the period under review, two prison sentences were issued in criminal courts in Giza and Shubra in two separate cases involving Muslim women who had obtained falsified documents allowing them to convert to Christianity and marry Christians. In December, the Cairo airport police arrested a woman and her husband on similar charges while they were attempting to leave the country.

The report documents the ongoing use of the Emergency Law to violate citizens’ basic rights. Blogger Reda Abdel-Rahman was placed under administrative detention for adopting Qur'anist thought, and Christian blogger Hani Nazir remains in detention without charge or trial on the grounds that he allegedly published material insulting to Islam on his blog.

On a positive note, the report documents a legal ruling issued in Cairo allowing a Baha'i youth to return to school at Alexandria University; the university had suspended him when he proved unable to obtain a personal identity card, although his Baha'i religious affiliation is listed on his 1987 birth certificate. Another court ruling allowed a Christian citizen to document his re-conversion to Christianity in his official documents more than 30 years after he converted to Islam. The report also notes that the Fayoum provincial authorities paid financial compensation to Copts harmed in sectarian attacks that took place in June 2008 in the village of al-Nazla, located in the Youssef al-Siddiq district.