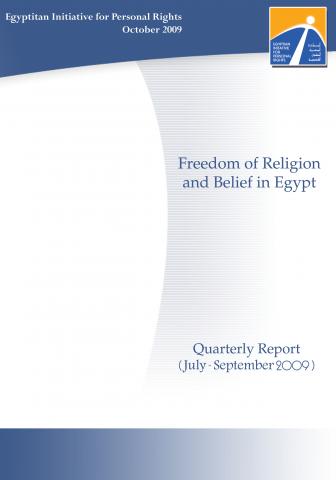 Report Summary- this report documents inter-religious sectarian attacks, and security interventions and abuses seen in cases in which Christians engage in religious rites in private buildings or attempt to obtain a license to establish new churches or are suspected of intending to turn existing buildings, or buildings under construction, into churches. Instances of this were observed in the governorates of Minya (in al-Hawasiliya and Izbat Basilius in the district of Beni Mazar) and in Beni Soueif (in Izbat Girgis, the district of al-Fashn and al-Fuqai village in the district of Biba). The report also discusses cases in which the security apparatus and municipal councils halted construction or demolished buildings under construction on Christian-owned property, suspecting that these buildings would be sold to the bishopric or turned into a church in the future. These cases were observed in the city of al-Adwa and the village of Reida in the governorate of Minya and in the city of al-Qusiya in Assyout.

Minya remained the major center of sectarian violence, whether related to the construction of churches, Christian religious practice or rumors of romantic relationships between Muslims and Christians (as was the case in the village of al-Sanquriya in the Beni Mazar district). In other cases, everyday disputes degenerated into collective Muslim-Christian violence (seen in the villages of Dafash in the Samalut district, al-Ismailiya in the Minya district and Girgawi in the Matay district).

The report also documents events that took place in al-Bagour in the governorate of Monufiya on 17 September 2009, when a Muslim man stabbed three Christians in three separate incidents in one day in the district of al-Bagour and the neighboring villages of Miyyit Afif and Bahnay. The attacks left one dead and two injured, one critically; the perpetrator was arrested the following day and the case was referred to the prosecutor’s office, which is still investigating the matter.

As usual, the report reviews the most significant judicial rulings to be issued in the period under review, as well as a summary of important administrative decrees, political developments, civil society activities and reports, both Egyptian and foreign, touching on religion in Egypt.