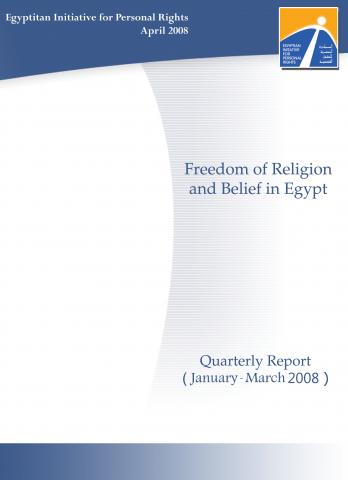 Introduction- This report provides a brief overview of the most significant developments for freedom of religion and belief in Egypt during the first three months of 2008. It documents new court rulings, legislation and government policies relevant to freedom of religion and belief, as well as instances of religious discrimination and other violations of religious freedom. It also reports on incidents of sectarian tension and violence and reviews the most important reports, publications, and activities related to the topic during the reporting period.

The report seeks to provide a primary source for documented information on the most significant political, legal, and social developments affecting freedom of religion and belief in Egypt. It aims to brief law- and policymakers, researchers, the media and other stakeholders of these developments, especially given the dearth of such primary information and the problems associated with verifying some of the facts. The report, therefore, does not offer an analysis of the facts, but only documents them as a basis for further analysis.

In preparing this report the Freedom of Religion and Belief Program of the Egyptian Initiative for Personal Rights (EIPR) relies on field research by program staff, complaints received by the EIPR during the reporting period, information gleaned from news reports and confirmed by researchers, and laws and governmental decrees related to freedom of religion and belief as published by the Official Gazette. This report is not an exhaustive and comprehensive overview of all pertinent developments, but is limited to the facts the report’s authors view as most significant and were able to verify.