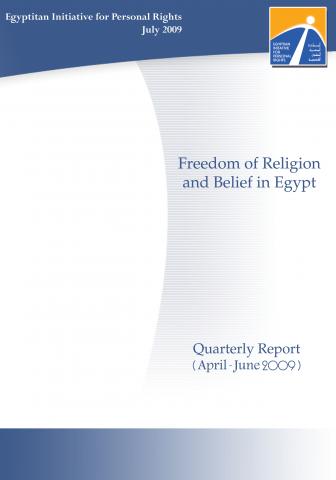 Report Summary- this report addresses the most significant developments seen in Egypt in the field of freedom of religion and belief in the months of April, May and June of 2009. The report documents six cases of Muslim-Christian sectarian violence that took place in the period under review in the governorates of Giza, Alexandria, Gharbya, Dakahlia, Beni Soueif and Qena. Four of these incidents began as fights between individuals before quickly developing into sectarian clashes. In addition, a romantic relationship between a Christian woman and a Muslim man sparked clashes in Manshiyat al-Salam, located in the Mahalla al-Kubra district of Gharbya, while violent clashes between residents of Izbat Bushra al-Sharqiya, located in the Fashin district of Beni Soueif, came after Christians held prayer services in a building that did not have the appropriate state license for this use.

The report notes the alarmingly high number of casualties to sectarian violence that occurred during the second quarter of 2009: a Muslim citizen lost his life in a fight in the Karmouz area of Alexandria in April, while two Copts were killed by Muslims in a revenge killing in Higaza Qibli, located in the Qus district of Qena. A 17-year-old Muslim was also killed during a fight that erupted in Kafr al-Barbari, located in the Miyyit Ghamr district of Dakahlia.

This report documents how the security apparatus continues to employ arbitrary arrests and unlawful detention sanctioned by the Emergency Law following incidents of sectarian violence in an attempt to pressure the parties to the dispute to accept a truce or traditional reconciliation.

The report also discusses the verdict of a Minya criminal court case in which a man was acquitted of the murder of a Copt in sectarian clashes that took place in October 2008 in the village of al-Tiba, located in the Samalout district of Minya. The verdict was issued after the family of the deceased signed a reconciliation agreement sponsored by the governor and security, executive and representative leaders in the governorate.

The report also addresses the bombings that took place outside the Orthodox Coptic Archbishopric of the al-Zaytoun Church in May 2009, which recall the assaults in the 1990s that targeted Egyptian churches; blasts that did not result in any casualties.

The report notes the continued difficulties faced by some Christians seeking to practice their religious rites. In addition to the clashes in Izbat Bushra al-Sharqiya, the report documents the security apparatus’s closure of two buildings used by Copts for prayer services without a permit, in Izbat Wassef Ghali Pasha, located in the al-Ayyat district of the 6th of October governorate, and in the village of Sabaa, located in the Samalout district of Minya. The executive and security authorities also demolished a building under construction in Matrouh, fearing it would be turned into a church. The report also notes that the Samalout prosecutor’s office in Minya questioned a citizen from the village of Dabbous who allegedly “engaged in religious practice without a permit in his home.” In addition, the report states that the security apparatus blocked two Salafi websites and prohibited a citizen from traveling due to his arrest in 2007 for embracing Qur’anist thought.

As usual, the report reviews the most significant judicial rulings on freedom of religion and belief to be issued in the period under review. The report contains a detailed review of a number of cases: a decision from the Court of Administrative Justice canceling the license of Ibda’a Magazine, on the grounds that it published a poem that “offends the divinity,” followed by a decision from the Supreme Administrative Court allowing the magazine to resume publication; a ruling from the Court of Administrative Justice refusing to recognize Maher al-Gohari’s conversion from Islam to Christianity; and a ruling from the Court of Cassation giving Kamilia Lutfi custody of her two sons, Mario and Andrew, after their father’s conversion to Islam.