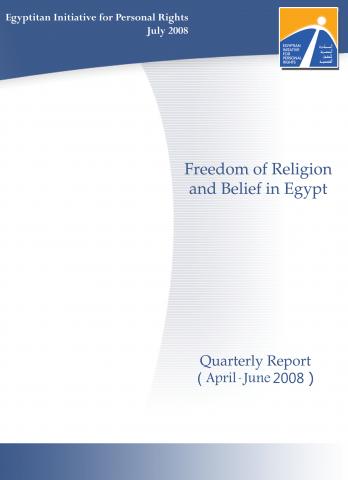 This report provides a brief overview of a number of significant developments for freedom of religion and belief in Egypt during the months of April, May, and June of 2008. The report reveals an overall escalation of sectarian tensions during the reporting period, which in some cases escalated into the use of collective violence against Copts due to the actions of individual Copts or rumors about such actions, as seen in two separate incidents in the province of Fayyoum in June. The report also provides an account of the armed assault on the Abu Fana Coptic monastery in the governorate of Menya, against a backdrop of a dispute over the ownership of the land surrounding the monastery. The EIPR’s First Quarterly Report had documented a similar attack against the monastery in January 2008.

This report also reviews a number of significant court decisions issued during the reporting period. Particular attention is given to the decision by the Court of Administrative Justice last April to withdraw the State Award for Achievement in the Arts from its 2007 winner, renowned poet Helmy Salim because of a poem he wrote that the court considered “an offense to the divine being.” It also examines a new law banning demonstrations in or in front of places of worship, as well as a new statute for Dar al-Ifta’, amendments to the personal status code of Orthodox Copts, and a ruling from al-Azhar’s Islamic Research Council that deprives the family of a Christian man who converts to Islam of their share of the inheritance. The report also reviews several political developments, new Egyptian and international reports, and conferences and seminars related to religious affairs in Egypt.