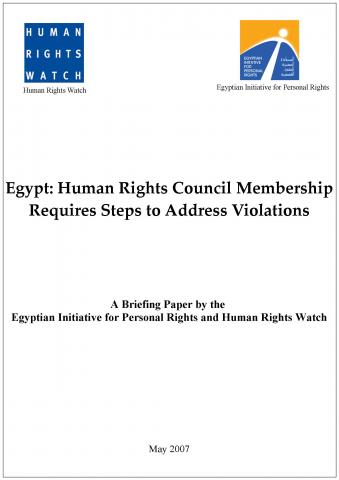 Introduction- On 17 May 2007, the United Nations General Assembly (GA) will elect 14 new members to the world's top official rights body, the Human Rights Council (the Council). When UN Member States established the Council in April 2006 to replace the Commission on Human Rights, they decided that members of the Council "shall uphold the highest standards in the promotion and protection of human rights" and that the General Assembly would "take into account the contribution of candidates to the promotion and protection of human rights."1  The undersigned organizations believe that the Egyptian government has not met these criteria.

Four of the 14 seats will be allocated to African states, and Egypt is seeking one of them. The undersigned organizations regret that only four African nations have submitted their candidacies for membership to the Council, thereby eliminating any real competition between them and depriving the GA member states of the opportunity to elect members with the best human rights records from among the continent's 54 states.

The undersigned are also dismayed that some of the governments with the worst human rights records are currently members of the Council, and that other governments with similarly dismal records – including Egypt – are seeking membership this year. However, the undersigned applaud the government of Egypt's willingness to submit itself to the frank review of its record of serious and continuing human rights violations required by the General Assembly resolution establishing the Council, especially given the government's history of denying access to United Nations experts seeking to provide an independent assessment of fundamental rights in Egypt.2

This letter provides an analysis of some of the pledges circulated by the Egyptian Government to GA member states prior to the elections, which include voluntary commitments in the field of human rights domestically and internationally.3