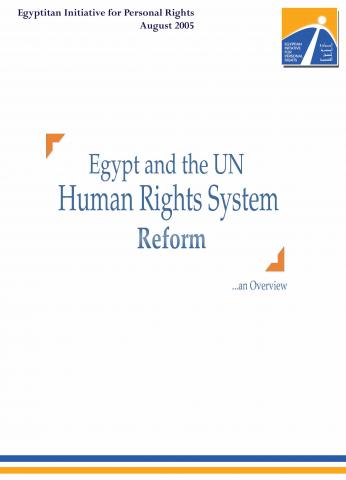 Introduction- From 14-16 September 2005, New York City will host the 2005 World Summit, held at the United Nations (UN) headquarters, and attended by approximately 170 Heads of State and Government. It is the largest congregation of the world’s leaders in history and provides a rare historical opportunity to reach fundamental decisions concerning security, development and human rights. The Summit will allow the international community to debate, in particular, much-needed reform of the UN human rights system, including the creation of a permanent Human Rights Council to replace the UN Commission on Human Rights.

Such reforms will play a critical role in improving the efficiency of the international community’s response to pressing human rights concerns.  Yet this important process has failed to receive the attention it warrants within Egypt. The inadequate response is due in a large part to the lack of information and resources available in Arabic discussing the reform of the Commission on Human Rights and the initiative to establish a permanent Human Rights Council. The Egyptian media has focused instead on issues relating to reform of the Security Council and the expansion of its membership and Egypt’s efforts to secure one of the proposed additional seats. By issuing this report, the Egyptian Initiative for Personal Rights (EIPR) seeks to correct this information deficit and to provide a summary of the history and development of the international human rights system reform process.

Another goal in issuing this report is to draw attention to the negative stance of the Egyptian government towards reform of the Commission on Human Rights. Egypt’s position has ranged from a strident rejection of the idea of establishing a permanent Human Rights Council to actual attempts to weaken the new Council by stripping it of its monitoring and protective functions as well as limiting its activities to thematic discussions and norm-setting, without any real role in ensuring the enforcement of rights protection.

The EIPR believes that the 2005 World Summit and the establishment of a Human Rights Council as a subsidiary body of the UN General Assembly provides an historical opportunity for human rights to receive proper attention within the UN. The establishment of a new body with new powers is the ideal route to remedy the problems of over-politicization, selectivity, and double standards that paralyze the Commission on Human Rights and render it ineffective and lacking in credibility and relevance. The EIPR is therefore both alarmed and disappointed by the response of the Egyptian Ministry of Foreign Affairs, which appears intent on ensuring that the new Council, if established, will not be afforded sufficient power to render it capable of protecting human rights with autonomy and effectiveness.

This report is part of the EIPR’s wider efforts to encourage Egyptian human rights organizations to utilize and play a more influential role within the regional and international human rights mechanisms. At the same time, it contributes to the EIPR’s ongoing commitment to monitor and publicize the Egyptian government’s attitude towards these mechanisms. The EIPR believes it is particularly important to assess the extent to which Egypt’s actions within the intergovernmental human rights institutions comply with its human rights commitments and, if necessary, to advocate for Egypt to adopt a more constructive role.

This publication therefore complements the EIPR’s wider advocacy work, which this year has included participation at both the Commission on Human Rights’ annual session in Geneva and at the UN Commission on the Status of Women in New York (on the occasion of the tenth anniversary of the Beijing Conference on Women). The EIPR also attended sessions at the African Commission on Human and Peoples’ Rights in Gambia to discuss Egypt’s periodic report on the implementation of the African Charter on Human and Peoples’ Rights. In addition, the EIPR has followed the ongoing negotiations between the Egyptian government and the European Union concerning the human rights section of the Egyptian Plan of Action within the framework of the European Neighbourhood Policy.

The international community is currently discussing a variety of reforms that aim to streamline and strengthen the UN human rights system. Such reforms include supporting and strengthening the Office of the High Commissioner for Human Rights; emphasizing the Security Council’s responsibility to protect civilians from gross human rights violations; restructuring the UN human rights treaty bodies system; and affirming key thematic human rights related to women, children and refugees, democracy and the rule of law, sexual and reproductive health, and combating HIV/AIDS.

This report deals with a single element of the proposed UN human rights reforms, namely the establishment of a Human Rights Council to replace the current Commission on Human Rights. The choice of focus is due to many factors, including the significance of this new Council (which will replace the highest international intergovernmental human rights body), the EIPR’s direct experience in dealing with this body and using its various mechanisms, and the Egyptian government’s opposition to and attempts to weaken this Council.

The report begins in Section II by outlining the establishment and formation of the Commission on Human Rights. Section III describes the Commission’s current crisis that led international entities, nearly sixty years after its creation, to seek its replacement with a more credible and effective body. Section IV discusses the various recommendations for reforming the UN, including the current proposal that will be discussed and voted upon by the world’s leaders next September. Section V analyzes the Egyptian stance towards these reform initiatives since they came to light at the beginning of 2005. It considers in particular Egypt’s opposition to a permanent body and its attempts to strip the Council of its monitoring and protective functions, to hamper the independence of its special mechanisms and to limit the participation of NGOs in its work. It also looks at how Egypt has attempted to postpone detailed discussion of how the Council will function until after the Summit. The report concludes with the EIPR’s recommendations to the Ministry of Foreign Affairs and the Egyptian National Council for Human Rights.