Following Wednesday’s executions: 15 people executed in one month this year, nine executed without even notifying their next of kin, among other violations that obstruct the course of justice

The Egyptian Initiative for Personal Rights and the Adalah Center for Rights and Freedoms condemn the sudden decision on Wednesday morning, February, to carry out the death sentence against nine people convicted for the assassination of the public prosecutor in case no. 81/2016/High State Security felonies. The Court of Cassation ruled on Sunday, November 25, 2018, to uphold the death sentences against the nine defendants. In the same case, the court reduced the death sentences against six people to life imprisonment while reducing a life sentence to 15 years in prison for four defendants; the court commuted the life sentence given to Ibrahim Abd al-Moneim Ahmed to three years in prison and acquitted five defendants. The Cairo Felony Court on July 22, 2017 had sentenced all these defendants and three others (28 defendants in total) to death following their conviction for the assassination of Public Prosecutor Hisham Barakat.

Yesterday, the families of the nine defendants were informed that their family members had been executed, despite the fact Article 472 of the Code of Criminal Procedure provides that, “The relatives of persons sentenced to death may meet them the day that the sentence is to be executed, provided it is far from the place of execution.” The defendants were put to death at the Cairo Appellate Prison on the morning of February 20, according to their families.

It is becoming the norm, in violation of the law, for the Prisons Authority to carry out death sentences without informing the families of the condemned persons to allow them to meet on the day of execution and without notifying their lawyers to attend the proceedings. In addition to this case, three people were executed for the killing of the judge’s son on February 7, 2019 and three others in connection with killing of Gen. Nabil Farag on February 13, 2019 without prior notification of next of kin or lawyers. This has also been the case in other cases of a political nature in which executions were carried out last year.

The case dates to the assassination of former Public Prosecutor Hisham Barakat on June 29, 2015, when a car bomb detonated in the Nozha neighborhood while Barakat’s car was passing. Barakat was killed in the blast and members of his guard detail and several citizens were injured. Several cars and nearby buildings were also damaged. The solicitor general for the High State Security Prosecution referred 67 defendants (51 in custody and 16 fugitives) to trial on May 17, 2016 before the competent felony court in the Cairo Appellate Court circuit. The trial began on June 14, 2016 and lasted nearly a year. The defendants faced numerous charges, including assuming leadership in a group established in violation of the law, joining the group and providing it assistance, espionage, the manufacture and possession of explosives and weapons, and attempted murder. Three defendants were also charged with premeditated murder: Mahmoud al-Ahmadi (21, in custody), Abu al-Qassem Ahmed (23, in custody), and Youssef Negm (24, fugitive). On June 17, 2017 the court referred the papers of 30 defendants to the Grand Muftu for his opinion on the death sentence; following the mufti’s opinion, 28 of them were sentenced to death.

The trial of the nine people who were executed in Wednesday was marred by numerous irregularities.

Allegations of violations cast doubt on the integrity of the investigations and trial:

According to the nine defendants, during questioning by the prosecution and during the trial, none of their personal lawyers were present. The prosecution questioned five of them without any legal counsel at all, while it appointed an attorney for the other four defendants. Eight of the nine defendants executed testified that they had been tortured after being disappeared; one defendant was disappeared for at least 40 days1. According to their testimonies, the torture included assaults with hands, kicks, and sharp implements, electroshocks on various parts of their bodies, and threats to harm the defendants or their family members.

The Court of Cassation in November 2018 reduced the death penalty to life imprisonment for six defendants, at least five of whom had been tortured according to statements they made during questioning. The court also reduced the sentences of 25 other defendants in the case who had also endured various forms of torture and mistreatment, according to their statements during questioning.

“I want to say that all the statements I made before this during questioning were false. I said them because I was psychologically and physically tortured by the people who arrested me so I’d say that. I am saying this today because the whole time I was being questioned, I thought I’d go back to them and they’d torture me again, but when I ascertained I’m in prison, I can say this today. I was taken  about February 23 from in front of the State Council in Doqqi, I don’t know what time they arrested me. They handcuffed and blindfolded me, and took me somewhere—I don’t know where because I was blindfolded. When I got to the place and went in the room, they tortured me. They hit me with objects, but I don’t know what because I was blindfolded. They beat me all over my body and also electrocuted me all over my body. Then they gave me a piece of paper to read and memorize so I could say it when I was questioned. When I came in to be questioned, I said what was written on the paper. 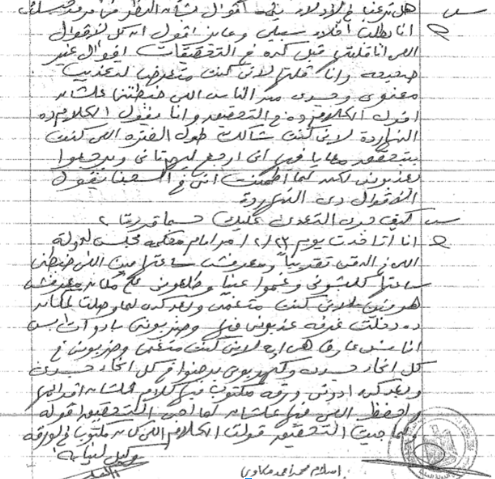 Although the defendants claimed to have been tortured before the prosecutor, who in some cases examined and documented their external injuries in the interrogation reports, the prosecution did not do its duty to determine the full extent of the torture allegations. The prosecution disregarded requests by four defendants to be examined by a forensic pathologist while delaying similar requests from other defendants such that they were not examined immediately. In the case of Mahmoud al-Ahmadi, he was not examined until 33 days later, which naturally affected the accuracy of the findings of the medical exam.

For example, defendant Abu Bakr al-Sayyed said, “I asked the judge to look at the signs of torture on my body, but he ignored it. When I told him I suffered psychological illnesses because of the torture, he responded, ‘Maybe you’re just possessed.’”2

15 people executed in one month

At least 15 people were executed in February alone. The EIPR and the Adalah Center see this as part of the increasing use of the death penalty in trials that do not meet due process and fair trial standards, and a turn to increasingly vindictive application of the death penalty. On February 7, 2019, three people were executed for the killing of a judge’s son in case no. 200/2014/South Mansoura plenary. On February 13, 2019, another three people were put to death in connection with the killing of Gen. Nabil Farag in case no. 938/2014/Kerdasa felonies, entered as case no. 9/2014/North Giza plenary.

Timeline of executions in February:

Three defendants in connection with the killing of a judge’s son in case no. 200/2014/South Mansoura plenary. The executed individuals were Ahmed Maher al-Hindawi, Abd al-Hamid Abd al-Fattah Metwalli, and al-Moataz Billah Ghanem.