EIPR demands the immediate release of Patrick George Zaki without pressing charges, and calls for an investigation into his torture and ill-treatment.

The application for leave to appeal was registered on 12 February 2020 under the no. 1372, and on Thursday 13 the prosecution accepted the application and set a hearing session on February 15 to look into the appeal itself.

“Your phone and ID”: first part of a study on emerging routine violations by law enforcement and criminal justice agencies in Egypt.

The first of these papers, published today in Arabic (translation forthcoming), documents the most egregious and disproportionate of these measures which has become a routine practice (in particular circumstances) for the police: forced searches of personal mobile phones during arbitrary stop and search operations. This measure has no legal basis at all in Egyptian law, not even in the context of declared emergency. The paper provides a brief narrative of how this practice has evolved from October 2019 and until the end of January 2020.

The EIPR again urges the court to sentence the defendants to the maximum penalty allowed for the crimes for which they are charged, the prosecution having declined to charge the defendants with torture under Article 126 of the Penal Code and instead opting for assault leading to death.

Young man tortured to death in Muqattam police station: locals and neighbours pay the price of bringing accountability to the police

The Egyptian Initiative for Personal Rights condemns attempts to intimidate the family and those who have acted in solidarity with the family of 22-year-old Muqattam victim Mohammed Abd al-Hakim Mahmoud, known as Afrotto, in order to influence the

The Egyptian Initiative for Personal Rights released a report today titled “The Trap: Punishing Sexual Difference in Egypt.” The report documents and analyses the increasingly frequent incidents, over the last four years, in which police have specifically targeted persons whose sexual orientation or gender identity does not conform to socially-sanctioned norms, specifically gay people or men who have sex with men, or those who are perceived as such, as well as transgender people. 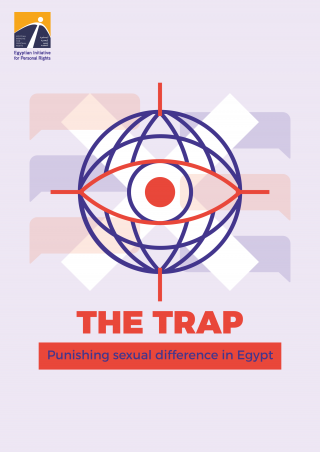 This report follows the journey of some of those arrested, from entrapment to imprisonment, in order to analyse the patterns of this security campaign against those considered to have non-normative sexualities. The report also analyses the roles of different actors in the criminal justice system, including the police, prosecution and Courts of Appeal, as well as the legal loopholes employed by this campaign and the way in which it violates a number of established legal and constitutional principles.

EIPR stresses the important role judicial institutions could play in punishing the wrongful use of force by police and law enforcement officers. Such actions are vital to stop the rampant cases of death in custody due to beatings and torture. This is especially true given the lack of effective oversight over these facilities by either independent state bodies or the judicial bodies tasked with inspecting them under Article 55 of the constitution and laws regulating the judiciary, prisons, and criminal procedure.

The family of Adel Abd al-Sami' , today filed a complaint with the public prosecutor (no.