Yara Sallam's harrowing account of being jailed next to "al-Makhsous," or the death penalty ward.

On the 15th World Day Against the Death Penalty, we publish former prisoner Yara Sallam's harrowing account of being jailed next to "al-Makhsous," or the death penalty ward.

I had never really thought much about my position on the death penalty. After I watched the film The Life of David Gale, I started to ask myself how one might possibly work on an issue as difficult as this. I don’t remember if I watched the movie before or after going to prison. Some things are confused in my head. Nor do I remember when it was that I got used to the screams of the women in al-Makhsous (the death penalty ward, makhsous meaning ‘special’).

The Askari (military) ward, where I was held, was separated from the death penalty ward by the disciplinary room. Every time they took a woman to be hanged, we all heard them calling her name and wailing. It was the women in that ward who taught me that everything in this world passes, even if your cellmate, with whom you share your food every day, is taken to be hanged. 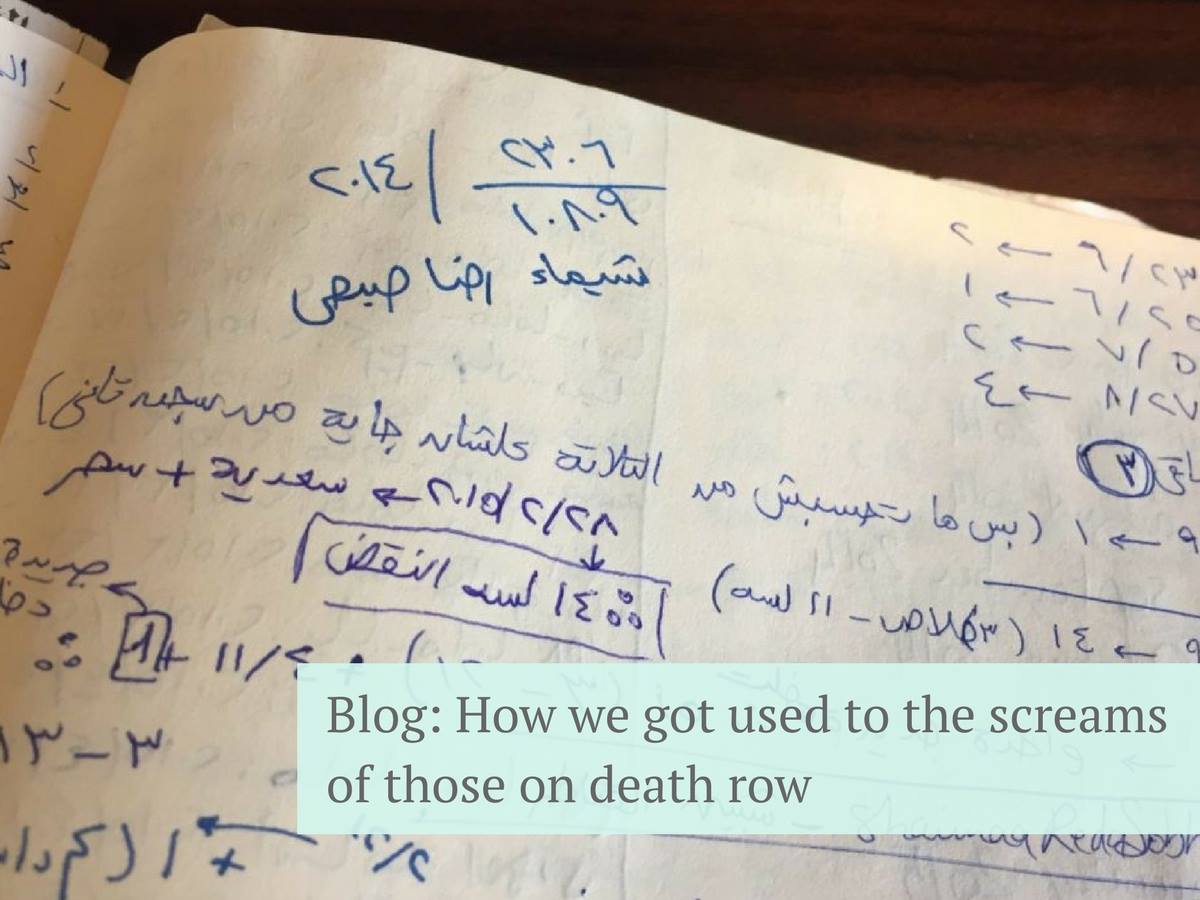 The next day they would put on the Quran, and after a while, when the rest of the prisoners had paid their condolences, everything would return to how it was before — jokes, laughter and chatter.

They told us that al-Makhsous was full, and that nobody had been hanged since the beginning of the revolution. But they had taken a woman to be executed one or two days before I entered the prison, on June 23, 2014. I think by the time I was released 15 months later, all the women in al-Makhsous had been hanged, and the ward had filled up again. The current president does not love life.

I remember a conversation with one of the prison guards. She told us that not all the officers have hard hearts, not all of them can watch the executions. At the time, I didn’t comprehend the incongruence between their belief in the legitimacy of their work and their inability to watch the consequences of it. Even if the killing is conducted lawfully, a so-called punishment for a crime committed, when it comes down to it, accepting what is happening must always be difficult.

There was a show. They searched al-Makhsous and things went from there. They sent a guard to bring two prisoners, claiming they wanted to give them back the things they had confiscated from them. After some time, everyone began to worry. It turned out they took two this time to hang them, but they didn’t take them straight from the ward as they do every time. Maybe they were worried their cellmates would cause problems.

I am trying to recall the details, but my memory fails me. Or maybe I don’t want to remember. Al-Makhsous has 10 cells. Each is supposed to accommodate one person, but because of the large number of prisoners, they put two women in one cell. Every cell displays the names of the two prisoners inside. Instructions come from the prison administration informing the prison who will be hanged and when. The prison closes early. An officer and guards enter the ward. They know which cell they will open. They take the prisoner to be hanged and leave. Women start wailing and we try to hear the name that is being called to know who is going to die.

Their stories evade me. I only remember the two sisters who killed tuk tuk drivers in order to take the tuk tuks and sell them. They killed more than one and were arrested. One of them confessed, and was praying to God, asking him to forgive her. The other sister said she didn’t do anything and was wrongfully convicted. Inside prison it is impossible to learn who really committed the crime for which she is accused and who has been wronged. So, how can a judge be confident that the person he is going to sentence to death really deserves to die?

I broke a molar tooth in prison and went to the dentist in the prison hospital. I heard the woman doctor tell the guard, “I don’t want anyone to come to me from al-Makhsous. I will go there myself to determine if anyone there needs treatment. They often come to the clinic and nothing is wrong with them. This is not right.” I think to myself, maybe they do this to get out of the ward, to walk in the sun, to see the sky and other people. Prisoners on death row do not walk around like the rest of the prisoners. Al-Makhsous is a closed ward. They are allowed to walk outside their cells, but only inside the ward. The only time those women leave the ward is when they go to the hospital or have a visit — though their visits are restricted to once a month, not every 15 days like other prisoners.

Today is the “15th World Day against the Death Penalty,” or the international day for the defense of life. Right now, many families might learn at any moment that their children have been killed. We must stop this crime and not life.